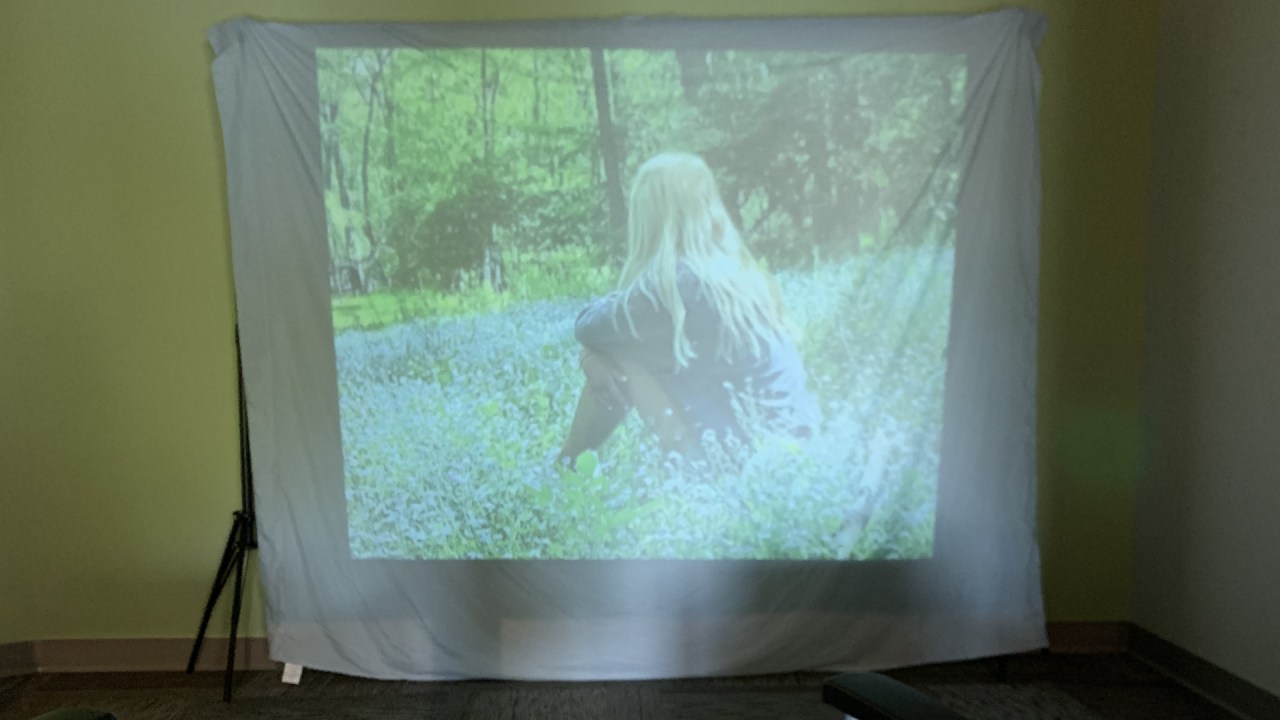 GRAND RAPIDS, Michigan (WOOD) — In a darkened room in Monroe Community Church, the glow of a projector bounces off a sheet. The artist of this digital piece uses it as a way to heal and hopes it will help others.

Lucy VanRegenmorter’s “Let This Be What Happened Here” is one of 12 of the first digital entries in ArtPrize 2022. The Massive Art Competition introduced the digital category this year.

The projector casts small, clipped videos onto a background that is personal to VanRegenmorter.

“So the sheet I use in the piece is my bed sheet from last year… my bed is a safe space for me, a space of calm and comfort,” she said.

Until what VanRegenmorter called just an ‘incident’ one summer evening.

“Unfortunately, it became a place of fear and transgression. And when that happened, I felt like I had been ripped off. I didn’t feel like I would ever be the same again,” she said.

After that, VanRegenmorter said it was difficult for her to look at the sheet, touch it, or even throw it away.

“No matter how many times I wash this sheet, I will never sleep on it again. Before I throw it away, I want something beautiful to happen to it,” she explains in her artist statement.

In the days following that night, VanRegenmorter began her healing process by collecting memories. The idea came to her while she was at the beach with her friends.

“We were on the pier and we were swimming and we jumped off the pier into the water and for a minute, for the first time since it happened, I just felt like myself before it happened,” she said. “I felt like my old self. And I felt like I just forgot it even happened for a moment.”

That clip can be seen in the projector’s slideshow. VanRegenmorter said she decided to capture the moment so she could look back on moments when she struggled with thoughts about the “incident.”

“I just wanted to record it so that when I inevitably started thinking about it again and had those bad feelings and bad thoughts again, I could look back on this good time and remember, ‘You were OK in this moment. Everything was fine at the moment and it will be fine again,” she said.

VanRegenmorter and her friends jump in a lake and at a party, she sits among the wildflowers, cheers from the bleachers at a Michigan State football game, and flashing street lamps whizzing past a bus window are just a few glimpses of her life.

As a child, VanRegenmorter remembers visiting ArtPrize with her class during field trips. She said her father submitted art in both 2013 and 2015, which inspired her to enter her own art. VanRegenmorter hopes her piece can send a message of hope and victory to others who have gone through similar experiences.

“I think it’s important to start a conversation. It can be something that’s really hard to talk about, especially if you don’t feel like anyone else knows what you’re going through,” said VanRegenmorter. “So I think it can be helpful, even if they don’t want to talk about it and want to talk about it, if they’re not ready to talk about it — and maybe they never will be — just to know that someone otherwise have been through something similar to yours and there is a way to get through it and come out better on the other side.”

“Let this be what happened here” is a way for VanRegenmorter to reclaim both herself and her space. Now it shapes how she moves forward in life.

“You can’t really change what happened, you can’t go back. And that’s something I’ll just have to live with. And that’s fine,” she said. “But I want to focus, move forward… on the things that make me happy and make me feel most like myself.”

“Let this be what happened here” can be seen in the Monroe Community Church at 1020 Monroe Ave NW in Grand Rapids.