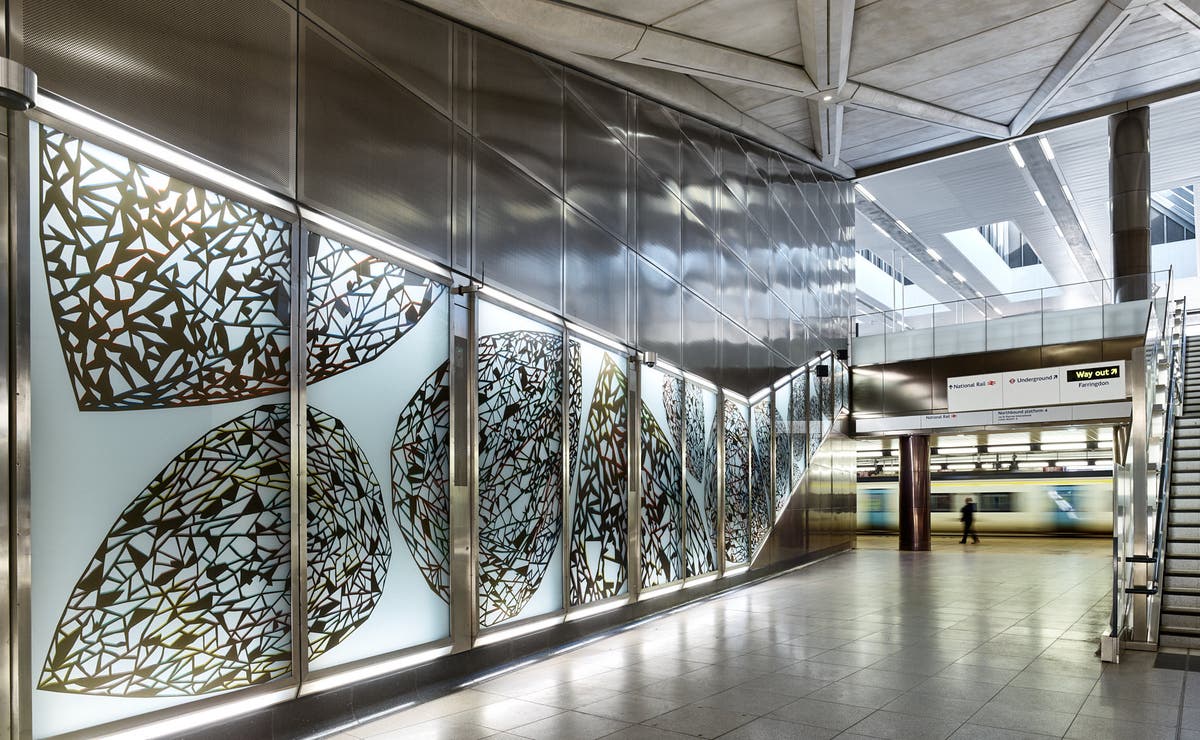 our decades after the initial proposal, and 13 years after the physical work began, the Elizabeth line opened on Tuesday. The new line, which connects Reading and Heathrow to Paddington, Bond Street, Stratford and Romford, in a plush royal purple, had 130,000 passengers on the train just hours after opening.

If you haven’t been there, the stations alone are worth seeing. Think massive champagne-colored metal surfaces, gigantic platforms as long as the shard, futuristic escalators and tons of contemporary art: TfL and Crossrail have joined forces to present their most ambitious presentation of public art ever.

Each Elizabeth line station has worked with a specific gallery and artist, who then transformed certain elements of the station or ticket hall – and the works are here to stay.

Sonia Boyce OBE RA – the recent winner of the Golden Lion at the Venice Biennale – has also created a mile-long piece of art (one of the longest in the UK) that will run through Custom House, Silvertown and North Woolwich.

“It is the largest large-scale project in the history of London’s transport,” said Eleanor Pinfield, Head of Art on the Underground. “It feels amazing that London is a city that puts great art and great design first, but really it’s not surprising. London is a beacon of culture and vibrancy, and it just brings it all together here.

The project isn’t even finished yet: in the future, we can look forward to more installations by internationally renowned artists, including Yayoi Kusama on Liverpool Street, video artworks by Turner Prize winner Douglas Gordon on Tottenham Court Road and three abstract artworks by British artist Darren Almond in Bond Street.

For art lovers, the Elizabeth Line metro stations may soon be counted as a popular destination.

Each of the artists has created site-specific work, matching and inspired by the community around each station. For example, Joffe has created gigantic portraits of residents of Whitechapel – based on real people she remembers from the station years ago.

There’s a woman brushing her hair on the tube, an elegant man wearing a cream sweater, another man moving — Joffe may remember him from commuting. Joffe also secretly smuggled in an image of her daughter Esme.

Each of the figures is made with specially cut colored metal sheets that are layered to look like an airy collage. For Joffe, there are dozens of ideas at play around the theme of community: the artist wanted to add a softer element to the giant hollow tube platforms, represent the neighborhood and create images that would be trusted and in the end, even part of the the metro station’s own crowd.

“This is very much a community and it had to represent that. I’ve thought a lot about whether I had the right to do that, and ideas about who you have the right to portray. But I couldn’t not. I couldn’t have the people who live here be a part of it.”

This is Joffe’s first public art project and she has brought the intimacy she is so known for in her paintings to this public space: “The personal and the personal is what turned me on,” said Joffe.

“It’s incredibly moving to be a part of it,” the artist added. After years of work, “They are here – they are in the world. And people see them, or as my daughter says, “don’t look at them mama”. I like that they are almost invisible, they are just like other people in the crowd. It feels magical to see them.”

British artist Simon Periton, whose artworks occupy both of Elizabeth Line’s new Farringdon ticket halls, has also commented on his surroundings, but unsurprisingly, the mood is very different in this spot on the edge of the City of London.

The first part, Avalanche, is at the darker of the two entrances, at Hatton Garden. It is a series of diamond shapes – referencing the jewels for sale along this famous street – in various sizes, all printed with ceramic ink on glass.

The second entrance, the eastern ticket hall, is the lighter and brightest of the two. Periton’s Specter is a giant expanse of white banner that covers all three sides of the entrance. It is also made of ceramic ink printed on glass, but is lighter, like an engraving.

Inspired by pub doors and the Victorian metalwork that separates the two halves of Smithfield, the cut-out design will mean interesting shapes emerge through the ticket hall as the light changes. It’s inconspicuous, so make sure you look up if you’re passing through.

“You’re trying to make something that communicates an idea on many different levels because a lot of different people come to see it. From little kids to old people, to people who aren’t interested in art, it has to do a lot of different things,” Periton said.

“It’s not like sitting in a gallery for an hour looking for something. You don’t have that luxury. It has to be something that will work on many repeated mini-views.”