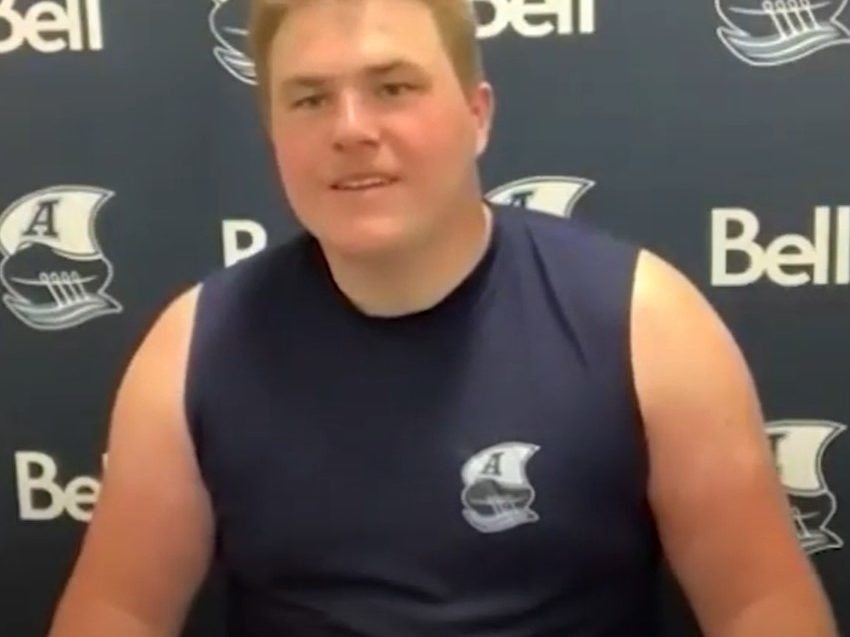 Bagpipes and pigskin were part of Gregor Mackellar’s young life.

In the end, he had to put the bagpipes aside and focus on football.

Life as a pro is demanding and the novice offensive lineman has thrown himself into the deep water at Argos training camp.

“He’s growing, he’s getting there,” Mackellar head coach Ryan Dinwiddie said. “We feel he has a great future in this competition.

“Is it going to happen right away? Who knows. We are happy with his development… He picks it up, he works his ass out and every day he improves.”

Mackellar was taken by the Argos in this year’s CFL draw with the sixth overall pick.

Born in Nova Scotia, Mackellar was recruited by St. Andrew’s College in Aurora, Ontario, for his prowess with the bagpipes and his prodigious frame on the roster.

He had to fulfill a dream playing NCAA football at Rice before returning to his native Nova Scotia where he worked out a college run at St. Francis Xavier.

“A little bit here and there,” he said when asked if he was still plodding into the bagpipes. “Pretty busy with football. This is my number 1 focus.”

Assuming the game isn’t affected by the ongoing labor stalemate, which was originally resolved, Friday night will represent Mackellar’s coming-out party like a pro.

Dinwiddie plans to give Mackellar the most reps on the left hat, one of many rookies who will be in for a heavy load.

Former college teammate Connor Ross, who selected the Redblacks with the 58th pick, is also expected to see action.

Ross is on the tight end.

His sister is Mackellar’s girlfriend.

The two rookies speak whenever possible to catch up on family matters at a time when football is all that really matters.

Much has been thrown at Mackellar in the camp.

Lines have many nuances and small details that must be experienced and learned.

To hear Mackellar tell it, he absorbs it all.

He even takes notes during film meetings.

Mackellar was at school in Antigonish in the days leading up to draft night earlier this month.

At his home in Timberlea, NS, his parents received a large, priority-shipped box.

“They asked me if I had ordered anything,” he recalls. “I told them there was nothing I was aware of.”

When he got home, Mackellar opened the box.

Inside was an Argos hat and a letter.

“It just said you could wear it if we select you,” Mackellar said.

They did, and Mackellar was overjoyed.

And work and learning and growing must continue as the camp grind continues.

The Argos will be in Nova Scotia in July for a home game against Saskatchewan.

Well before Mackellar became an Argos, his immediate family and extended members bought tickets to the July 16 game at Acadia in Wolfville.

“I would say most of my family, for the most part, are football fans,” said Mackellar. “I’m drafted by the Argos, of course, but we’ll see what happens.

“They will go to that game anyway.”

Mackellar can also be there in uniform.

In the meantime, a lot of work awaits.

The Argos gathered for a morning walk on a day estimated to take Dinwiddie about three hours.

According to Dinwiddie, there were no installations, a day reserved as a review day.

He would describe the session as slow.

“I was a little disappointed in our efforts,” he said. “It’s been tough with injuries.”

No serious injuries have been reported, at least not the kind that ended Isiah Cage’s season when the starting left tackle sustained an ankle injury in camp last year.

As the Argos began their workday on Tuesday, labor took center stage after news that the grassroots had rejected a deal signed by the league and the players’ union.

The politics of pigskin is out of Dinwiddie’s control.

What he’s trying to do is avoid injuries and create a competitive environment.

“Being on the field was productive,” said Dinwiddie when asked if anything productive had been achieved. “Defensively, we had some good energy late and they had good training.

“Offensively we were terrible…I wasn’t happy with the performance or effort.”

Argos announced the signing of DE/LB Jake Hlava, while DB Cam Glenn was released. Hlava is ready to join the team in Guelph, Dinwiddie said. An extra body can’t hurt at a time when so many players are in pain. In football, more bodies usually contribute to the competitive spirit. Glenn appeared for one game in 2019 during a defeat to the Redblacks in late October… Dinwiddie isn’t sure what will happen to QB Cole McDonald, who played as a rookie in Toronto’s season finale against Edmonton last year. Austin Simmons has effectively replaced McDonald, who is not with the Argos. Dinwiddie plans to use a three-man rotation in the QB position Friday night, but isn’t sure if the incumbent McLeod Bethel-Thompson will dress. Chances are he won’t, but Mac should get reruns in the June 3 exhibition final in Guelph against Hamilton, assuming there’s no work stoppage.