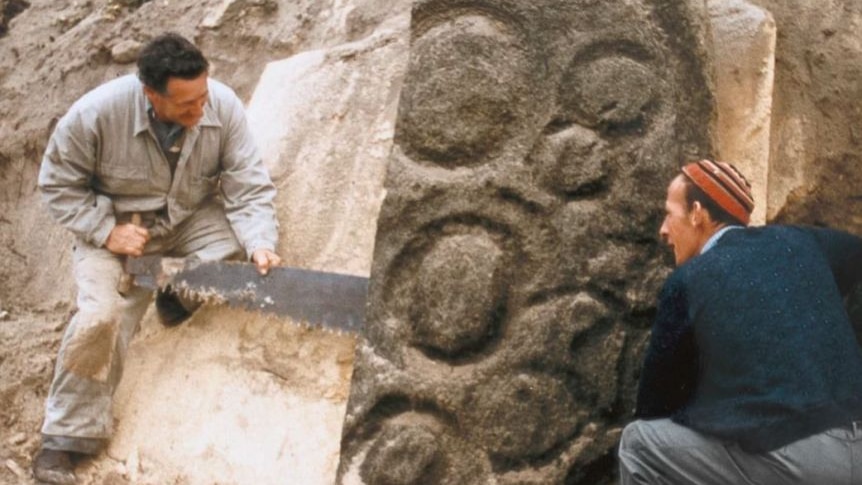 Two ancient Aboriginal petroglyphs are returning to northwestern Tasmania after a long campaign to return them to the rugged coastline from where they were stolen in the 1960s.

After more than five decades, three institutional apologies and painstaking conservation work, the petroglyphs are loaded onto trucks that drive hundreds of miles to their home in a remote corner of the state.

Today, the sacred 14,000-year-old petroglyphs begin the final leg of their journey with a smoking ceremony at each museum before heading to their final resting place for the next week.

Aboriginal Land Council of Tasmania manager Rebecca Digney said it was a “memorable” day that many First Nations Tasmanians had been waiting for more than 50 years.

“These discussions about why these beautiful objects were kept in glass in a museum went on for decades around kitchen tables and in palawa people’s lounges, and eventually they started to grow,” she said.

“Now, in 2022, we now see those sacred objects have returned to their proper place on the land, so it’s been a long time.

“It’s all happening and there’s a buzz in the air because everyone’s so excited — this is reconciliation in action.”

He thanked members of the Aboriginal community for their tireless campaign to get the carvings back.

“Probably 20, 30 years I can remember people talking about this, so to see it happen now is amazing,” he said.

Zoe Rimmer of the Tasmanian Aboriginal Heritage Council worked at TMAG when the carvings were still on display.

She said it was “great” to be there to say goodbye to the building.

“It was then part of my job to give tours of that gallery and awkwardly explain to visitors why that exhibit was so offensive to our community,” she said.

“It’s a huge milestone in the significant shift that has taken place at this institution over the past three decades.”

Michael Mansell, chairman of the Aboriginal Land Council, told the crowd in Launceston that the artworks were like puzzle pieces; By themselves they make no sense, but when put back in place they tell a story.

“If you look at all the petroglyphs along Tasmania’s west coast, our ancestors left us a record of Aboriginal life 15,000 years ago,” he said.

“Of course you can’t understand the message that’s being left for us now because it’s not part of the bigger picture, but you put it back and you see it all makes sense.”

Ms Digney said there had been several political and legal hurdles to jump just to get the art back in principle, let alone physically move it from one end of the state to the other.

Both museums had to agree and go through the processes outlined in the Aboriginal Heritage Act. Then Roger Jaensch, Minister of Aboriginal Affairs, had to sign a final permit.

Get Tas notifications in the ABC News app

Here are the steps to get the latest news alerts on the latest Tasmanian stories straight to your phone.

Since that permit was granted, Ms Digney said there had been “a coming together of minds” to tackle the unprecedented task of getting the rock art home, including enlisting the help of an expert stonemason and structural engineers.

The preminghana site can only be reached on foot or several hours’ ride on four wheels—two unfeasible options for transporting massive but fragile ancient art.

“The bigger rock carving in Hobart had to have the concrete removed carefully, so now it weighs about a ton, and the smaller one weighs about 300 kilograms,” she said.

“The community’s initial preference was to bring in these huge sacred objects by helicopter, as the idea of ​​hauling heavy machinery across that landscape was just not acceptable, but we’ve had to change that.

Cultural practitioners will be with the trucks every step of the way, Ms Digney said, so that the heritage of the landscape can be protected.

She said the petroglyphs would go back to where they came from, and while that meant they would soon be covered in sand, that’s how it was in her opinion.

The celebrations are not universal in Tasmania’s Aboriginal groups.

The Circular Head Aboriginal Corporation (CHAC), whose geographic area includes preminghana, is protesting at the site over what it says is a lack of consultation with it and the wider community in the area.

CHAC chairwoman Selina Maguire-Colgrave said both non-Indigenous and Aboriginal residents should have been involved in the repatriation process.

“This has been happening constantly for years,” she said.

“Because we only have one land council and they are based in Hobart, they are supposed to speak for all of Aboriginal Tasmania, which they don’t.”

“I think culture should be shared and not divisive.”

“We need to involve the local community in these big decisions. It can’t be front and center in Hobart all the time.”

Ms Maguire-Colgrave said putting the petroglyphs back into the landscape would amount to “burying”.

“Why not use some of the world’s oldest petroglyphs as a teaching moment and tool for reconciliation?” she said.

“We could have put them in our local museum or check out a purpose-built facility near Preminghana so we can learn from them.”

Ms Digney said the land council has consulted hundreds of people, including in the North West, and described the idea of ​​moving the art from one institution to another as “counterproductive”.

Dark past brought to light

The return of petroglyphs is part of a wider reckoning among Tasmania’s cultural institutions on how to acquire and display Aboriginal artifacts and history.

TMAG and the Royal Society of Tasmania publicly apologized in February 2021, saying that “nearly 200 years of practice was morally wrong”.

In colonial times, the organizations were collectively involved in exhuming the bodies of Aboriginal people in the name of science and taking sacred artifacts without permission.

Launceston City Council, which manages the Queen Victoria Museum and Art Gallery, apologized to Aboriginal Tasmanians during NAIDOC week in 2020, but not specifically about the petroglyphs or artifacts.

TMAG director Mary Mulcahy said the museum recognized that spiritually and culturally significant materials and materials acquired through unethical means must be “unconditionally returned to their rightful owners”.

She said the museum had “unreservedly apologized for its past practices – including the removal of the preminghana rock carvings in the 1960s – which resulted in immense pain and suffering for the Tasmanian Aboriginal people”.

*The Tasmanian palawa kani language does not use capital letters

Set the ABC News website or app to “Tasmania top stories” from the home page or the settings menu in the app to keep getting the same national news but with a sprinkle of more relevant state stories.

Here’s a taste of the latest stories from Tasmania: