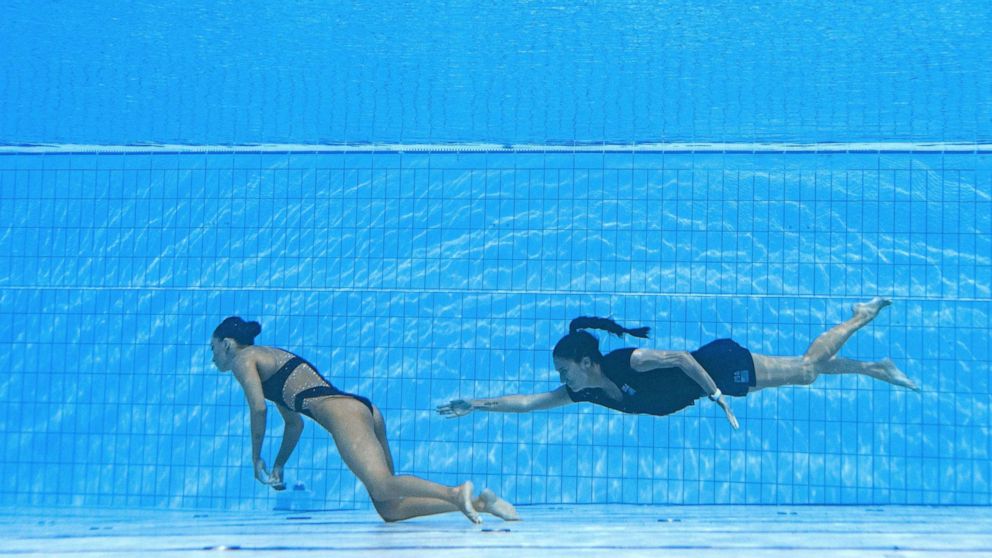 American swimmer Anita Alvarez breathed a sigh of relief on Thursday after her coach dramatically rescued her when the athlete passed out on Wednesday night and sank to the bottom of the pool in the middle of her routine.

The dramatic scenes took place during the World Watercourse Championships in Budapest, Hungary, as Alvarez, 25, competed in the final of the women’s solo event and suddenly lost consciousness, sinking her to the bottom of the competition pool.

Andrea Fuentes, Alvarez’s coach, immediately dove into the water and was able to pull Alvarez to the surface before the swimmer was taken off on a stretcher for medical treatment while the rest of Team USA, who watched the game in the arena , looked on, clearly shocked by the ordeal.

Fuentes, who spoke exclusively to “Good Morning America” ​​on Thursday, explained what went through her mind during the ordeal.

“When you’re done, you really want to breathe because you’re holding your breath for a long time and the first thing you want to do is breathe,” Fuentes said. “And I thought she was going to go down, so I immediately thought, [I] I knew something was up, so I went as fast as I could. And I reach her and grab her to the surface and try to calm her down and let her breathe.”

Fuentes began administering CPR until medics and the team doctor could take over.

“Anita is fine,” Fuentes said in a statement following the terrifying incident. “The doctors have checked all vital signs and everything is normal: heart rate, oxygen, sugar levels, blood pressure, etc…everything is fine.”

Fuentes continues: “We sometimes forget that this happens in other endurance sports. Marathon, cycling, cross country… we’ve all seen images where some athletes fail to finish and others help them get there. Our sport is no different from any other, only in a pool do we push boundaries and sometimes we find them.”

Even after having to be rescued, Alvarez managed to finish the game in seventh place with a final score of 87,6333.

Alvarez witnessed a similar event at the FINA Olympic Games Qualifying Tournament for Artistic Swimming in Barcelona in June 2021, when she fainted during a competition and Fuentes immediately jumped to her aid in the pool on that occasion.

For now, however, it is yet to be decided whether Alvarez will continue in this year’s competition.

“Anita is now feeling well and the doctors say she is fine,” Fuentes concluded. “Tomorrow she will rest all day and decide with the doctor whether she can swim the final or not. Thank you for all your good wishes for Anita.”