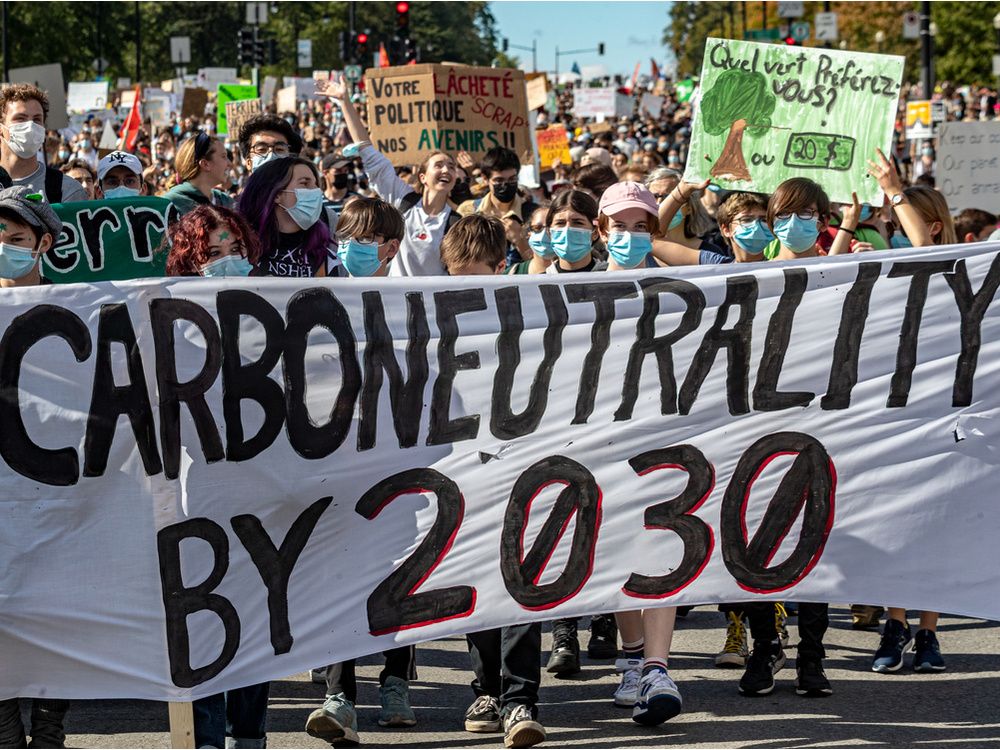 Three years ago, against a backdrop of crucial federal elections, half a million Montreal residents took to the streets for a historic demonstration led by Swedish schoolgirl activist Greta Thunberg, demanding urgent action to fight climate change.

It was a turning point in Quebec that showed political leaders at all levels of government that the climate crisis had become a common problem.

On Friday, the protesters will be back – gathering again at the Sir George-Étienne Cartier monument on Parc Ave. at 1 p.m. — with an even more desperate plea as an equally critical Quebec election campaign draws to a close.

The Montreal event is one of dozens planned across the province, from Alma to La Pocatière, and one of many organized around the world by the Fridays for Future movement, coinciding with the end of the Climate Week at the United Nations.

While Thunberg and her “how dare you” outburst of world leaders made headlines during Climate Week 2019, this year’s summit has attracted far less attention, despite the clock ticking to secure a livable future.

The world has been distracted in recent years by a global pandemic, while a brutal, unprovoked war in Ukraine, perpetrated by nuclear-armed Russia, now poses another serious threat to humanity.

But fire after flood after famine after hurricane after drought remind us that these challenges cannot be used as an excuse to avoid difficult choices or serious efforts. The devastating impact of climate change is here. It’s happening now. And the window left to limit global warming to 1.5C above pre-industrial levels, as set out in the Paris Agreement, is closing fast.

This is the message the protesters will bring to the streets of Montreal on Friday. As always, young people lead the way. Students “strike” to demand urgent action, backed by unions and community organizers. They beg decision-makers not to condemn younger generations to a grim fate on an uninhabitable planet because of greed, denial or indolence.

This cri de coeur should ring in Quebecers’ ears as we head to the polls on October 3. The government we elect now will help us through much of the time to steer the planet away from disaster and what they propose to combat climate change carries enormous weight. Not all young people living in fear can vote for an ecological disaster. So parents and grandparents have a duty to consider their concerns when we mark our own ballots.

Quebec is at a crossroads – politically, ecologically. And the paths ahead diverge drastically.

Québec Solidaire has the most ambitious goals, promising to reduce emissions by 55 percent to below 1990 levels by 2030. They also pledge to invest at least $47 billion in public transportation, tax the purchase of gas-guzzling SUVs and examine and decide each government project through the lens of climate impact.

Quebec liberals pledge to cut emissions by 45 percent below 1990 levels. They will increase water royalties to industry sixfold and invest massively in green hydrogen, a clean energy source, while developing more wind power to meet growing electricity demand. to fill.

The Quebec Conservative Party, on the other hand, would reconsider things already settled in Quebec. It would approve a liquefied natural gas project in the Saguenay and allow shale gas fracking.

In between is the Avenir Québec coalition. As an incumbent government, its emissions reduction targets remain at 37.5 percent below 1990 levels, far less than the 44 percent scientists say is needed to limit global warming.

The party also plans to seize the opportunity of the ecological transition to make Quebec the green battery of North America. But it supports a lien in Troisième between Quebec City and Lévis, which will only exacerbate urban sprawl and increase reliance on personal vehicles, one of the province’s largest and fastest-growing sources of greenhouse gases.

When the CAQ was first elected four years ago, its lack of environmental credibility made it particularly inappropriate to face the doomsday warnings issued just weeks later by the Intergovernmental Panel on Climate Change.

But 150,000 students on the streets of Montreal in the spring of 2019 — and 500,000 marching on September 27, 2019 — stirred public opinion. Unable to ignore the growing consensus on the need for climate action, Prime Minister François Legault’s government went on to ban oil and gas exploration in Quebec, ignoring a project to develop liquefied natural gas in the Saguenay during its first mandate. the CAQ – a start.

Friday’s protest, while unlikely to be that massive, still has the potential to alter political momentum at a critical juncture. The hopes of Quebec’s youth depend heavily on the outcome of this election as voters realize that we still have the power to set a course for a better future for our children.