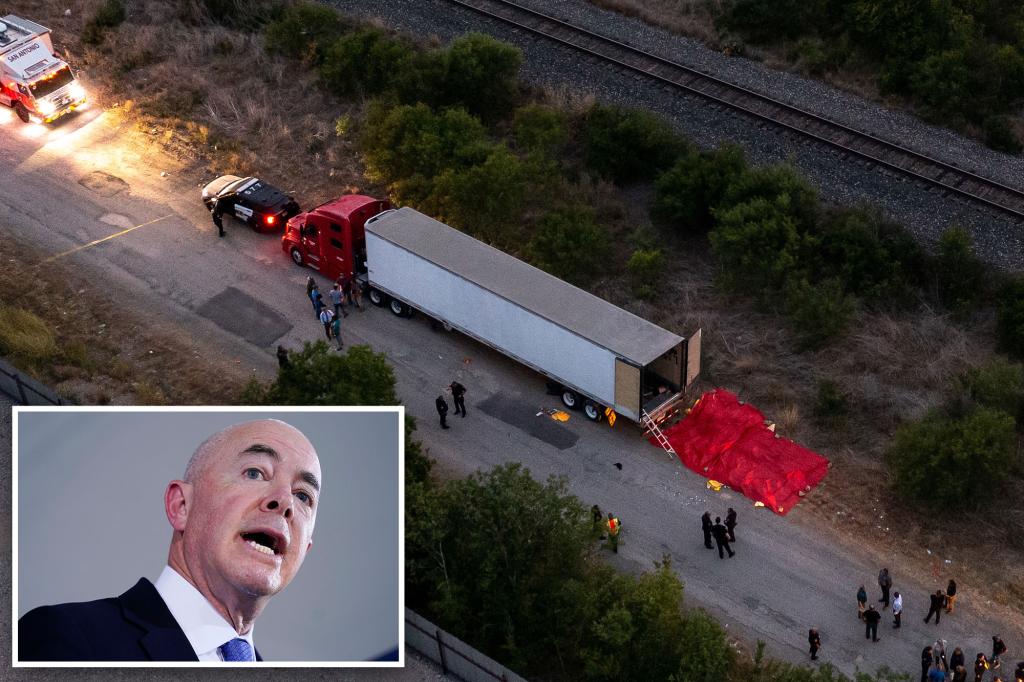 Mayorkas tried to fend off critics who blamed the government’s allegedly lax border policy for the tragedy.

“We’ve said repeatedly and we continue to warn people not to take the perilous journey,” Mayorkas said on CBS News’ “Face the Nation.”

“We saw so tragic in San Antonio, Texas, one of the possible tragic outcomes of that perilous journey, and so many people don’t even make it that far into the hands of exploitative smugglers.”

He said migrants traveling from Central and South America to the US-Mexico border receive false information from people smuggling cartels before making the trip.​

“They are putting their lives, their savings, in the hands of these exploitative organizations, these criminal organizations that don’t care about their lives and just want to make a profit,” Mayorkas said.​​

On Monday, a blistering 18-wheeler was abandoned on the side of a remote road in San Antonio – and the bodies of dozens of dead migrants were found piled within it, with several corpses also found on the ground nearby.

The truck had no working air conditioning, despite temperatures reaching 103 degrees.

An official report has been drawn up against the driver and one of his employees.

Texas Governor Greg Abbott was one of the first to blame the tragedy on the Biden administration.

“These deaths are on Biden,” Abbott said on Twitter late Monday. “They are the result of his deadly open borders policy.

“They are showing the deadly consequences of his refusal to enforce the law,” added the Republican governor.

Authorities said the truck had crossed the border in Laredo, about 240 miles south of where it was found, after being “cloned” to resemble a legal vehicle owned by a local transport company.

When asked by CBS’ Margaret Brennan how the truck got into the US, Mayorkas said the smugglers have become more sophisticated in recent decades.

He acknowledged that smugglers can use “advanced means” to get a truck across the border, but at the same time the US is ramping up its efforts using technology and manpower to thwart such efforts.

“But I have to say, we have banned more drugs at ports of entry than ever before. We rescued more migrants. We see a challenge that is truly regional and hemispherical, and we are addressing it accordingly,” Mayorkas said.​