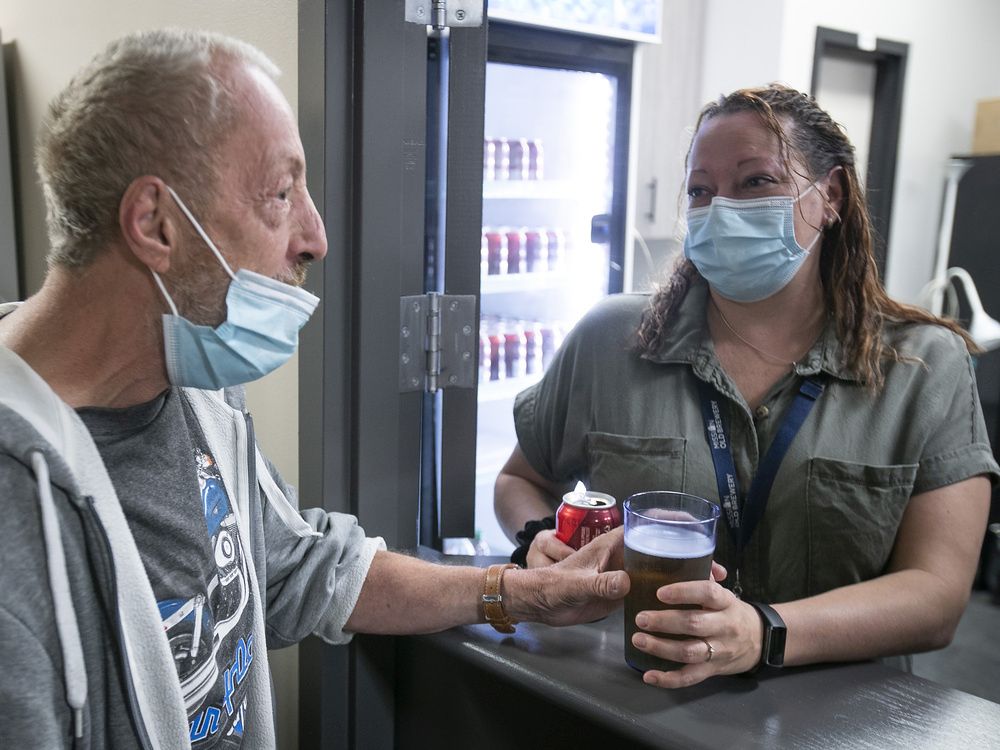 Stéphane has not had to beg for money for three weeks.

“I used to beg every day,” he said Wednesday from the fourth floor of the Old Brewery Mission in Montreal.

When Stéphane needed money, it was partly to buy alcohol to feed a heavy dependency that he says started 15 years ago. Twelve of those years were spent on and off the street.

In between the comments, Stéphane sipped a beer—one of many that will be given to him daily in predetermined doses during his stay at the Old Brewery Mission. Stéphane (who preferred to keep his last name private) is one of the few early participants in an alcohol management program that officially kicked off at the shelter on Wednesday. It aims to meet the needs of men with chronic alcoholism who are homeless in Montreal.

For people like Stéphane, there seemed to be no realistic paths to long-term aid in the city until now.

“Historically, emergency shelters have been unable to welcome people who are heavily intoxicated,” said Élaine Polflit, a coordinator in the Continuum populations vulnerables et intervention de crisis at the CIUSSS du Centre-Sud-de-l’Île-de – Montreal. “Those individuals have historically been even more marginalized than people who are already homeless.”

The inability to access existing services has placed people with chronic alcoholism in precarious situations, often relying heavily on health and emergency services.

“We’ve seen some of the participants in this program come back to the facility from the hospital because they were hit by a car, because they fell down the stairs, because they got into an argument and didn’t even know,” said James Hughes, president. and CEO of Old Brewery Mission. “And that’s the kind of risk that they face every day, and that’s the kind of risk that we’re going to try to reduce and eliminate through this program… this is really a proactive early intervention type program that hopefully will do further harm to these people.”

The program is not the only one of its kind in Montreal, but this program is unique in that it is specifically located in an emergency shelter. The program, funded by the provincial government and administered by the shelter and the local CIUSSS, is intended as a transitional phase to stabilize a person’s health so that he/she is then able to move on to services that were previously not realistic. were options for them.

The goal isn’t necessarily for users to stop consuming alcohol altogether, “but for many, that’s going to be an avenue they couldn’t have imagined until now,” Polflit said.

The program offers more realistic help for people with chronic alcoholism for whom strict options like detox and AA programs don’t work, Polflit said. Many of the people they expect to join have already tried and failed to get through others.

“We know from the survey that there is a population that their alcohol problem is so severe and so chronic that it’s impossible to ask them to do something obligatory,” Polflit said.

Stéphane is one of those people.

The programme, which is the result of a pilot project at the old Royal Victoria Hospital, can accommodate approximately 30 people at a time and has no fixed duration. When a person starts, they agree that their alcohol use will be managed by the shelter. The dosage is determined in consultation with the participant and the staff and is administered once every hour throughout the day, with the aim of preventing withdrawal and intoxication.

“We try to find that good place where the person feels comfortable,” Polflit said.

What this does is shift a person’s motivation from finding ways to consume because the need has already been met, said Emilie Fortier, the director of the St-Laurent Campus services at the shelter.

“It’s stabilized here, it’s safe,” she said. “Slowly we have people who have started playing chess, taking time for themselves, buying electronics for themselves, discovering Netflix. Such things. Things they (previously) had no mental or physical space for to achieve those goals.”

Stéphane said on Wednesday that he has projects planned for the future. Although he’s only been on the program for a few weeks, he said he feels like he’s already changed — he’s more sociable, which he attributed to better sleep, and physically he feels great.