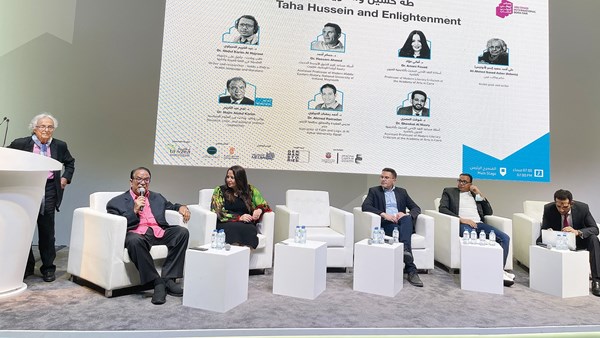 The session: “Taha Hussein and the Enlightenment” took place yesterday, at the end of the symposia of the 31st Abu Dhabi International Book Fair, with the participation of writers and academics, and in the presence of Dr. Ali bin Tamim, President of the Abu Dhabi Center for the Arabic Language.
The poet Adonis said, “He was refined in his own kind and reached the range himself… He alone is a race.” I always meet Al-Maarri and I met Taha Hussein before 1967, the time of setbacks, and I recorded this meeting, so I wrote an article about it called “An Arab Miniature in a Greek Statue”, which was published by the newspaper “Lisan al-Hal” in Beirut at the time, and our interview revealed many common concerns between us. we Arabs cannot really be free, politically and culturally, in everything that has to do with the relationship with our past, so that we look at it as our peers look at Jewish unity and sister-Christian monotheism, at their past and at their religious, cultural and political legacies. The second issue: we the Arabs have mixed and mixed the idea of ​​growth and the idea of ​​progress, and growth has caught all our attention until it almost replaced progress and took its name.
Adonis wondered: why did the idea of ​​growth overwhelm us, and the idea of ​​progress absent? Why did the West advance and leave the Arabs behind? It was also formulated in what we call the “Renaissance”.
For his part, Hossam Ahmed, Assistant to the History of the Modern Middle East in National Ireland, spoke about the administrative work that Taha Hussein carried out from the Ministry to the University and Education, saying that he had seen the documents and projects that he would like to be entrepreneurial and describe him as a practical thinker who has made great changes. In the Academy of the Arabic Language and Universities, he has established many institutes to study the Arabic language, from focusing on culture to producing culture.
Amani Fouad, professor of modern literary criticism at the Academy of Arts in Cairo, focused in her intervention on Taha Hussein’s book “On the Margin of the Biography” which is one of the most beautiful and kind biographies, pointing out the importance of the dean of Arabic literature in all his works, both on an intellectual and creative level, from the novel to history and criticism and press article.