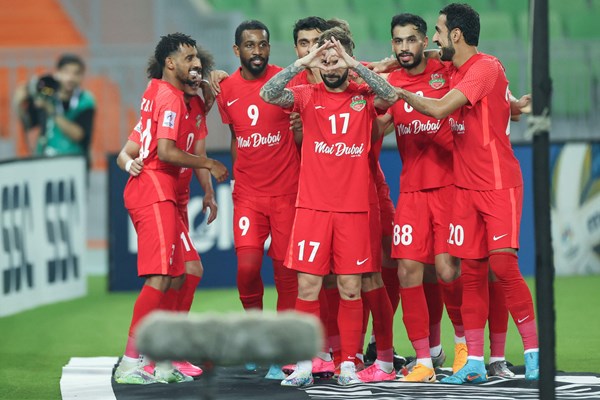 Al-Ahly youth took a smashing win over Qatar’s Al-Gharafa 8-2 in the fourth round of the AFC Champions League, storming the competition for the qualifier ticket for both second and first instead, and also restored a lot of morale among the players and the team, as far as history goes, The Knights opened all the doors with this overwhelming result.
Since the launch of the AFC Champions League version with the new system in 2003, the Emirati clubs have achieved several great results in the tournament, with Al Ain beating Esteghlal Tehran 6-1 in the 16th round of the 2017 edition, and Sharjah 6-0 on Saudi cooperation in the “2020 edition” of the group stage. † And let’s not forget Al-Ain’s 6-0 result over China’s Shenzhen in the “2005 Edition” semifinal, the biggest result in the tournament’s semifinal history.
The 8-2 result caught the eye of the Al-Ahly youth and became the biggest ever in the history of clubs in the UAE since 2003, and it is worth noting that this is the second biggest result in the Asian Championships for our clubs, following Al-Wasl’s 10-1 win over Pakistan’s Wahib in the 1993 Asian Club Championship.
Al-Ahly’s youth went down in history by being the first club from the west of the continent to score “+8” goals in the tournament since its founding in 2003, and the ninth in history in the tournament. level across the continent. South Korea tops the list with 3 clubs each, while China, Thailand and the UAE have only one club to set this historic record.
Despite this overwhelming and historic result, the result of the Saudi Federation, beating Umm Salal of Qatar 7-0 in the “2009 edition”, remains the biggest difference ever in the West, and then comes the result of Al- Ahly youth in second place with 8 goals for two goals, and in 2012, Al Hilal Saudi Arabia beat Baniyas 1 in the round of 16, followed by 6-0 Al Ain, Foulath and Sharjah from Schengen, Al Qadisiyah and Sharjah respectively Al Taawun, in fourth place.
Among the major numbers that Al-Ahly youth wrote with the big win is the registration of 6 different players for the eight goals, and in the history of the tournament since 2003, there are 7 previous clubs that scored 6 different players and more in one match, and Al-Ahly youth is eighth, and Gamba Osaka remains the record holder by taking on 8 different players in one match, when they defeated Vietnam’s Quang Nam 15-0 in 2006. There are 6 clubs for which 6 several players scored before Al-Ahly youths are Seongnam, Busan and Daegu from South Korea, Kashima Antlers and Kawasaki Frontale from Japan, and Foulath Khuzestan from Iran, so Shabab Al-Ahly The Second from the West records this number!
At the level of the players, Abdulaziz Sanqour scored his first goal with Shabab Al-Ahly in 5 years on April 25, 2017, and coincidentally, the goal also came in the AFC Champions League against Esteghlal Tehran in Iran, and the match ended with a score of 1-1.
As for Uzbek Aziz Janiev, he scored his fourth goal with Shabab Al-Ahly in the tournament in just 8 matches, and he also scored two goals from two direct free kicks in a rare event, and it may set a precedent in the tournament !
Al Gharafa suffered the biggest loss in the history of his participation in all Asian Championships, 8-2. He has never lost more than 3 goals, or more than 4 goals in one match, and if we look at the last 8 matches in the AFC Champions League for Al Gharafa, we see that he only got 8 goals, that is, who he received in one match, which is equal to everything it received in 8 matches before, and the result is also the second largest loss to Al Gharafa in all local, regional and continental tournaments in modern history after the 8-1 defeat to Al Sadd in the league in 2018.
At the level of Qatari clubs, Umm Salal’s result in which he lost 7-0 to the Saudi Federation remains the biggest, then comes Al-Gharafa’s result against Al-Ahly youth, and in third place comes the result of 5-0 received by Al-Sadd twice from Al-Hilal, Lokomotiv, Al-Duhail from Al-Ain and Al-Rayyan From Tehran’s independence.