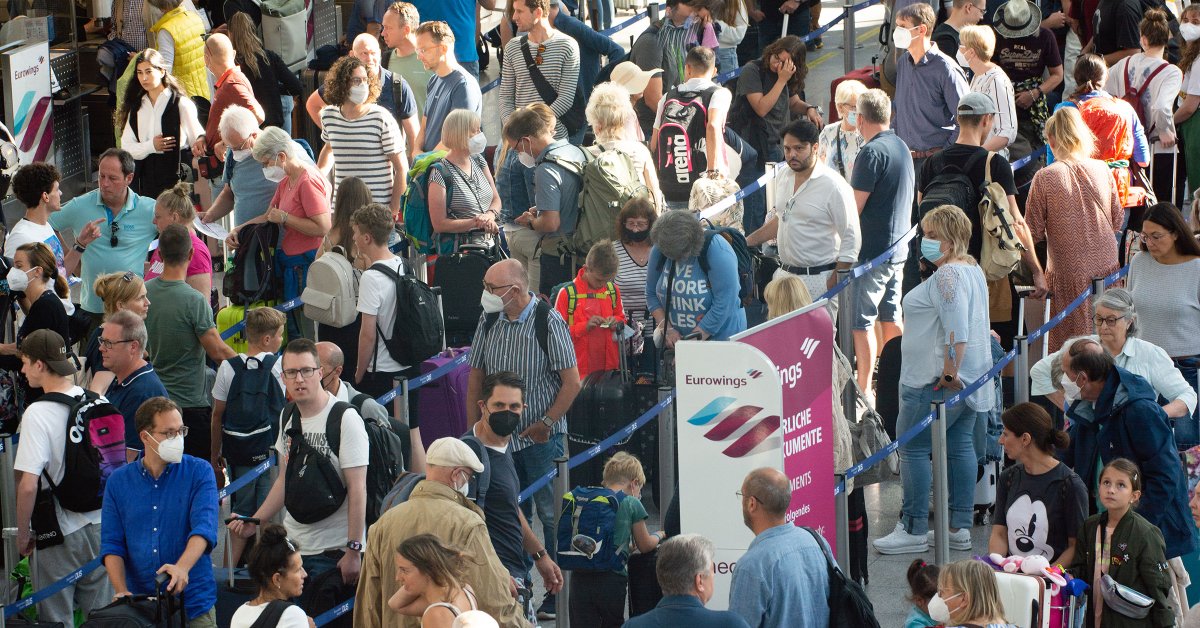 OOn the morning of early June, the security line at Copenhagen’s Kastrup Airport snaked in long, grumpy arcs away from the scanners, back through the automated boarding pass machines to the end of the departure lounge, down the stairs and all the way back to the 7-Eleven at the entrance to the terminal. “It was bad,” said one of the young workers in neon yellow polo shirts, who had recently been hired to calm the nerves and provide information to irritated and desperate travelers. There are many of them today, even in an airport that usually exemplifies smooth transit; Kastrup has been voted the world’s most efficient airport more than a dozen times. She pulled out a video of the seemingly endless queue on her phone and added: ‘Normally we can help people through the queue if they are going to miss their flight. But that day we were told we couldn’t because that was basically everyone.”

Across Europe and the United States, what should have been the summer of the joyous return of travel has instead become a season of chaos. Deathly long lines at check-in and security; hundreds of flights are canceled weekly because airlines cannot man them; baggage that doesn’t show up for days. Much of this is pandemic-induced pain after the airline industry has virtually ground to a halt for the past two years and is now struggling to catch up with rising demand. And as bad as it is for the passengers, airline and airport workers are suffering more: pilots, flight attendants, security personnel, baggage handlers and even bus drivers at the airport are reporting being overworked and stressed like never before.

With the July 4 holiday weekend in the US and widespread labor strikes underway, it doesn’t look like the situation will be resolved any time soon. “Summer will still be tough,” said Umang Gupta, general manager of Alton Aviation Consultancy. “Airlines obviously want to take advantage of demand coming back, but I don’t see all of these affiliates being able to hire by then.”

Read more: Flight canceled or delayed? This is what you need to do

In June, it took four hours to get through security at Düsseldorf Airport, while last week at Schiphol, the security queue stretched across the terminal, through a tent set up along the road, and back into the building. A technical error at Heathrow over the weekend of June 18-19 resulted in a “luggage” of unclaimed luggage that reportedly started to stink 10 days later.

That same month, Iberia airlines reported that 15,000 passengers had missed their connection at Madrid’s Barajas Airport since March. In the past two months, London Heathrow and Gatwick have asked both airlines several times to limit their daily number of flights. EasyJet canceled 40 flights a day in June, or about 1,700 for the month; British Airways has taken 8,000 off its March-October schedule; and a random perusal of flight tracker flightaware.com shows that United, KLM, American, Delta and Lufthansa are all currently canceling dozens a day.

Travelers wait in long lines outside the terminal building to check in and board flights at Schiphol on 21 June 2022.

It all stems from a combination of staff shortages and recurring travel. While the total number of passengers worldwide is still well below 2019 levels, the number of people flying with European airlines increased by 425% in March from the previous year and by 228% from North American airlines. Individual airports have experienced similar patterns: 5.9 million more passengers flew via Paris airports in May, 4.1 million more via Amsterdam and 3.4 million more via Frankfurt than in the same period last year. “Passenger numbers are now higher than at any time since the start of the pandemic – and growing,” said Sarah Fairley, senior press officer at Heathrow Airport, in a written statement. “We’ve gone through 40 years of growth in just four months and that’s put a lot of pressure on the entire airline industry.”

Given the pent-up demand, shouldn’t airlines and airports have seen the increase coming? “Yes and no,” says Gupta of Alton Aviation. “It seems clear that, especially in the summer, demand would be high. But what we’re hearing from airlines everywhere is that the recovery is more dramatic than even the most optimistic forecasts predicted.”

Read more: On vacation this summer? Welcome to the Revenge Travel Economy

At the same time, ongoing travel restrictions in some parts of the world and a number of false starts left some airlines wary of ramping up too quickly. “There were so many variables that it was impossible to predict when the rebound would happen,” Gupta added.

The global aviation industry continues to experience significant staff absenteeism from successive waves of COVID-19, as well as having some 2.3 million employees – a full 21% of the workforce – during the pandemic. rejected. The shortages affect all groups, from pilots and flight attendants to baggage handlers, security personnel, air traffic controllers and the flight attendants who help passengers board the plane, and they need time to get going. “There is an incredibly tight labor market across Europe – not unique to aviation,” said Virgina Lee, director of media and communications for Airports Council International’s European office. “But we also need to remember that when you recruit people to work at an airport, they need to have a security clearance. It’s not like recruiting for a supermarket.”

Obtaining approvals can take up to 16 weeks in some countries, in addition to the time it takes to find candidates and train new employees. “To be fully staffed today, you should have started that process in mid-December,” Lee says. “When, if you remember, we were at the height of Omicron and indeed the height of uncertainty about travel restrictions.”

At the best of times, an airport is a well-oiled machine, where infrastructure personnel work with airlines and third-party suppliers to make travel smooth. But that same interdependence helps explain why, even when an airport manages to tackle one disruption, others keep cropping up. At Copenhagen’s Kastrup airport, for example, the government decided in November to bolster its security staff, while air traffic in Europe was still relatively doomed. “It cost a lot of money to hire people that we didn’t immediately need at the time,” said Lise Agerley Kürstein, head of communications at Copenhagen Airport. “But our CEO made the decision so that we would be ready for the summer holidays.”

Passenger baggage lines will be outside Terminal 2 at London’s Heathrow Airport on June 19, 2022.

They haven’t quite made it, but with 330 hires since January, security personnel are almost back to pre-pandemic levels, and the twisting lines of late May and early June have largely given way to “normal” wait times, Agerly Kurstein says. But security, she admits, is only part of the disruption. “The airlines, the third-party companies, they all have problems getting employees too, and that makes it difficult for everyone. How do you rebuild an entire airport?”

Some of those who have ever worked in airports have left for higher paying, less difficult or more stable careers. The workload has increased dramatically for those who have stayed in the industry, which could lead to more departures. “When we came in the spring, the airlines were like, there’s a demand, let’s make it work,” says a flight attendant for a major US airline flying to Europe. (She asked for anonymity because she wasn’t authorized to speak by the airline.) “But we just don’t have the people. I can look in our app every day and see that we have 70 fewer people, and that’s just flight attendants from one base.’

Read more: Can Barcelona restore its love-hate relationship with tourists after the pandemic?

As a result, she and her fellow aviation workers are working much longer hours in much more tense conditions. Because so many flights are canceled due to staff shortages, those that do fly are often diverted, meaning crews can’t predict when they’ll get home or even where they’ll spend the night. Previously, cabin crew worked no more than four flights a day, but now five is not uncommon. And the layovers have become shorter — so short, the same flight attendant tells TIME, that they often don’t have time to sprint across the terminal to find the only eatery still open (many airport concessions also remain closed due to staffing problems). “We’re just exhausted,” she adds. “This job is not what I applied for [for] all those years ago. Pleasure is not in it because the passengers are stressed. And when the passengers are stressed, that gives us stress.”

It’s that kind of stress and exhaustion — and in the case of at least one airline, British Airways, the COVID-19-era pay cuts that have yet to be canceled — that help explain the strikes that are posing a new wave of challenges for airports. . On June 21, 1,300 Southwest Airlines pilots picked up the company; on June 30, Delta pilots did the same in Atlanta and other airline hubs. On the same day, Paris Charles de Gaulle ground staff launched a four-day strike, forcing the airport to cancel 10% of its flights; while it was day four of a six-day strike for the Ryanair crew in Spain. British Airways check-in staff and ground staff have also agreed to labor actions for sometime this summer.

“It’s not necessarily about their compensation, but if I were in their shoes I would probably demand more,” said Gupta of Alton Aviation Consultancy. “That’s because the amount of work has increased so much. Among pilots in the US I keep hearing: ‘I’ve never worked so much in my life; I’ve never flown so much in a year.’ And it’s not just pilots: it’s security personnel, it’s baggage handlers, it’s all hired workers.”

SAS airlines, which has one of its hubs in Copenhagen’s Kastrup, is facing a potential strike next week, meaning the recent relative calm at the airport may soon fade.

Early this week, Martin Lindblom, a 39-year-old visual artist on his way to Amsterdam from Copenhagen, waited to pass through security next to large posters begging passengers for patience. Expecting the worst, he checked in online and arrived at the airport two hours early, but was pleasantly surprised to find the line moving quickly. Still, he didn’t take any chances. Noticing that he would have to fly home from Amsterdam Schiphol, one of the most troubled airports, he had resigned himself to a long day before his eventual return. “I’ll be at the airport six hours before that.”