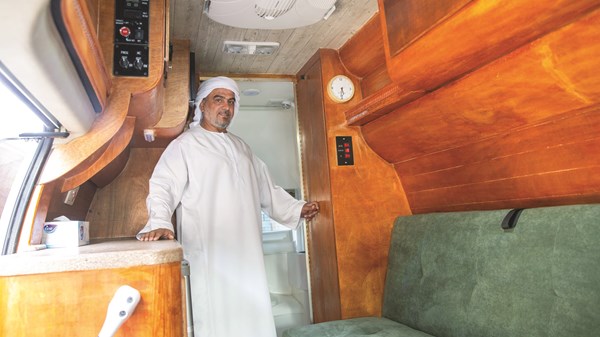 Ahmed Abdullah Al-Marri believes in his artistic and artisanal talent, which has made him persevere in dealing innovatively with the things around him. His enthusiasm for repairing and maintaining the house, including electricity and wood, earned him experience in practicing various professional crafts. One of the challenges he worked hard on was the project to convert a freight vehicle into a travel caravan, where he proved his ability to design and implement the internal workspace and master the proliferation of vocabulary.

tin cars
Ahmed Al-Marri says: The passion for handicrafts and recycling things around me grew up with me since I was young, when I made tin cars as toys for rent, which makes me happy and excited to have new experiences . The presence of this instillation in my childhood contributed greatly to my distinction among my peers in the art class at school, and I found myself getting closer to this world based on imagination and discovering my skills to perform. And the compliments I heard motivate me to keep creating. Al-Marri’s passion for craftsmanship continued during the renovation work of the house, and he used to complete it on his own without relying on maintenance and repair personnel. He believes in the importance of arming the individual with technical skills so that he can cope with any breakdown that arises, electrical or otherwise, making him self-sufficient and not dependent on labor to do the job for him.

first experience
The high craftsmanship that Ahmed Al-Marri enjoys has led him to take on several successful projects. Converting a van into a caravan for backpackers was his first experience. He describes it this way: The idea came from the fact that I regularly watched this sort of thing through videos available on the Internet, when I decided to buy a van. Then the ideas came to design the content and distribute the furniture to turn it into a caravan that includes services that bring comfort to the users. He fitted the van from the inside with woodwork, which gave it a kind of luxury, in addition to wiring electricity to distribute the lighting and supplying it with internal appliances such as television, refrigerator and the standard specifications in caravans.

stressful and fun
Al-Marri points out that work on the caravan took one to two hours on alternating days, after returning from work, and took six months. He mentions that as it was his first experience in this field, it came with some obstacles, such as the lack of tools needed to handle some wood technologies, and the lack of travel requirements used in the caravan. He often had to make some parts himself, which was tiring and fun at the same time.

aspirations
Ahmed Al-Marri confirms that with the proliferation of backpacker adherents, on the other hand, we find a lack of services in the open tourist areas such as parking lots, electricity points and sewage drains. It is mentioned that the presence of these services makes it easier for individuals to pass their time comfortably and easily. their demands.