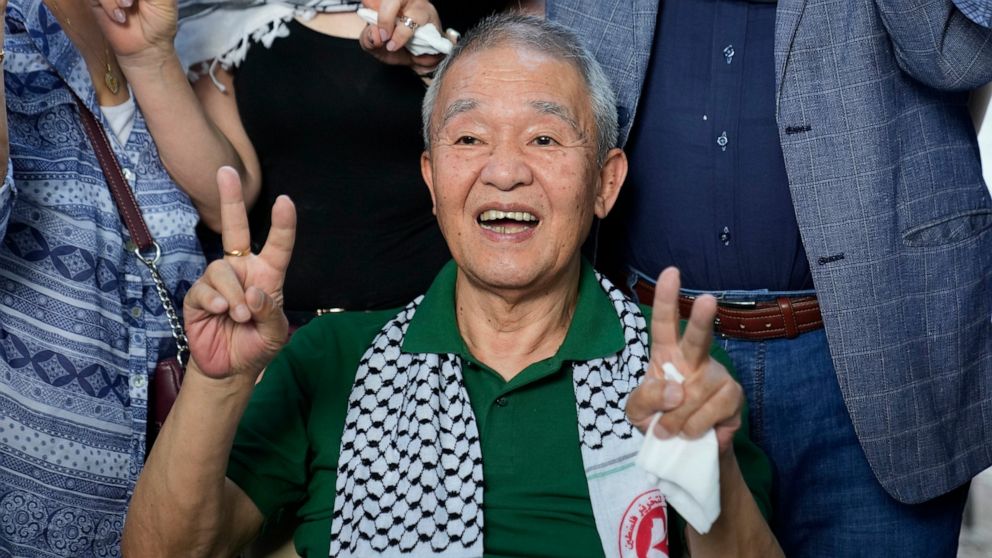 BEIRUT – An elderly Japanese militant who spent more than a decade in an Israeli prison for his part in a deadly attack on the Tel Aviv airport appeared in Beirut Monday at an event commemorating the 50th anniversary of the attack.

Kozo Okamoto, 74, spent 12 years in Israeli detention for a May 30, 1972 attack on the international airport outside Tel Aviv, believed to have been carried out by members of the Japanese Red Army guerrilla group. Twenty-six people were killed, including Christian pilgrims.

Okamoto was released in 1985 in a prisoner exchange between Israel and Palestinian guerrillas and has since been granted political asylum in Lebanon, where he has lived peacefully for decades.

The ceremony at a cemetery in Beirut where many Palestinian militants are buried was organized by a radical Palestinian faction, the Popular Front for the Liberation of Palestine. It was attended by several dozen people and officials from Lebanese and Palestinian factions, including Hezbollah in Lebanon. The participants gathered around a memorial to four pro-Palestinian Japanese nationals.

The 1972 attack on the airport is believed to have been a joint operation between the PFLP and the Japanese Red Army.

With a Palestinian flag around his neck and the slogan of the PFLP, Okamoto looked faint as he walked to the grave with the help of several men. He did not speak during his 30-minute visit to the cemetery and smiled and waved at times.

Okamoto’s rare public appearance came two days after Fusako Shigenobu, who co-founded the Japanese Red Army, was released from prison in Japan after serving a 20-year sentence and apologizing for hurting innocent people.

The Japanese Red Army, a violent ultra-left group associated with Palestinian militants, was founded in 1971 and took responsibility for several international attacks, including the 1975 takeover of the US consulate in Kuala Lumpur, Malaysia. suspected in the 1972 machine-gun and grenade attack on the airport then known as Lod Airport.

The PFLP is a radical faction of the Palestine Liberation Organization that rose to prominence after the simultaneous hijacking of four western planes in 1970 and the seizure of an Air France flight to Entebbe, Uganda.

PFLP official Marwan Abdul-Aal told The Associated Press that Palestinians have always faced double standards because when they resist the Israeli occupation forces, they are called terrorists. Meanwhile, Western countries are now supporting Ukrainian resistance to the invading Russian forces, he said.

“The world is not fair and this is what those people always said,” Abdul-Aal said of Japanese fighters who supported the Palestinians.

In the 1972 attack, Okamoto and two of his colleagues arrived in Tel Aviv on a flight from Europe, then gathered their bags, packed guns and grenades, and opened fire, killing and injuring dozens, according to AP reports. .

The two Japanese with Okamoto were killed in the attack while he was wounded. Okamoto was later tried in Israel and sentenced to life in prison.

Okamoto and four other Japanese were arrested in 1997 by Lebanese authorities in eastern Lebanon after years of illegally spending years in the country, protected by Palestinian and Lebanese left-wing groups during the chaotic days of the 1975-90 civil war. They were tried and the four were handed over to Japan in 2000, with Okamoto becoming the first person to be granted political asylum in Lebanon.

Japan has been demanding that Okamoto be transferred from Lebanon for years, but Beirut has repeatedly rejected the demand. He is considered a hero by many in Lebanon and the Arab world for standing up for the Palestinian cause and opposing Israel.

At the opening hearing of his trial in Lebanon in 1997, Okamoto was asked if he had used a forged passport to enter Lebanon and told the Beirut Criminal Court: “I do not understand why I am being charged with using a forged passport. ”

“I am an Arab resistance fighter,” he said. “I did it for the Palestinian cause.”