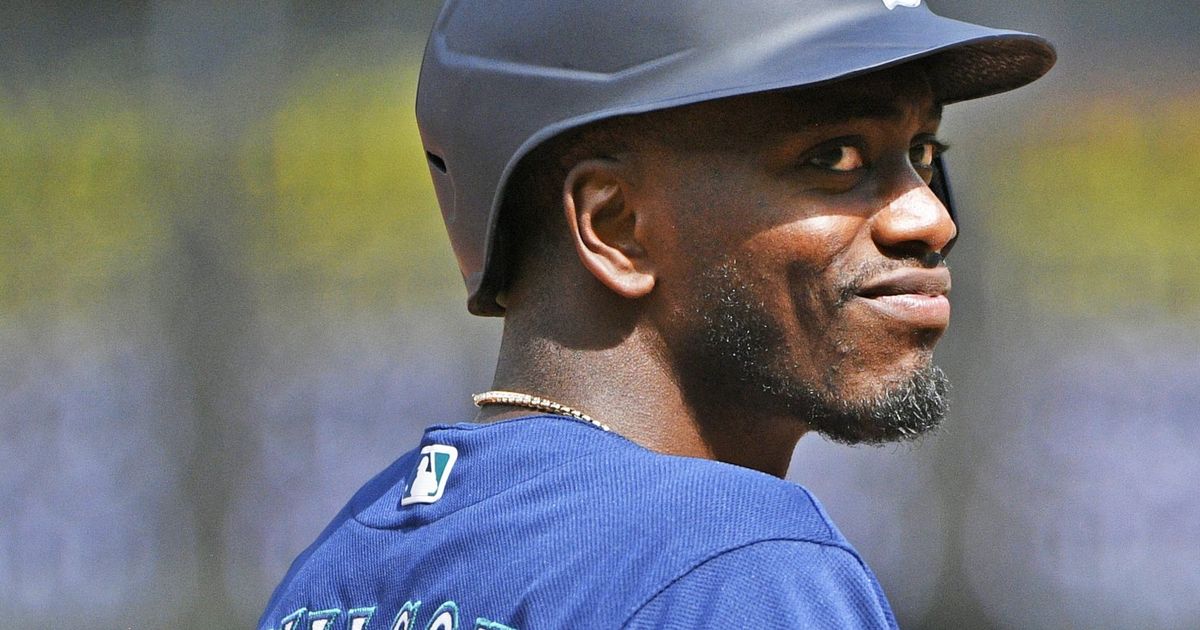 As broadcaster Tom Huytler’s unmistakable baritone boomed his name and number like a pinch-hitter in the eighth inning, and the guitar riff and hard drum beat of his walk-up song – Jay-Z’s “99 Problems” – echoed through the sound system. of T-Mobile Park, Marcus Wilson was officially a Major League Baseball player—a moment eight years in the making.

Intending to get a single, Wilson quickly prepared to face hardthrowing righthander Jorge Lopez in his first big league at bat.

Veteran umpire Doug Eddings understood the situation and motioned for Wilson to step out of the box and enjoy the ovation he received from the announced crowd of 17,412.

You only get one first at bat in the big league, and if you’ve waited as long as Wilson – eight seasons in the minor league, 660 games and 2,756 at bats, there’s no need to rush.

After a few seconds, Wilson dug in and delivered a mature, professional plate appearance, completing a walk from Lopez, soiling four fields at 148 mph or higher, and unchasing off-speed pitches thrown to make him chase.

“It was great,” said Mariners manager Scott Servais. “Every time boys are called up, you hope to get them in. I thought it was a great at bat against a really good pitcher. (Lopez) has great things. He came out swinging and did well.”

It got a lot of cheers from his teammates, who gathered on the railing of the dugout for its debut.

‘Good for him,’ said Servais. “He’s struggled through the minor leagues to get this opportunity today. Everyone is excited about him. We’ve done a good job of getting him in. We’ll see where it leads from there.”

Wilson, who turns 26 on August 15, had his minor league contract selected from Class AAA Tacoma ahead of Wednesday afternoon’s game against the Orioles and was added to the active roster in a series of pregame roster moves, including the option to bring back infielder Kevin Padlo. to Tacoma and puts Tom Murphy, who is undergoing shoulder surgery, on the 60-day injured list.

Utility player Sam Haggerty was also recalled from Tacoma and had three hits on Wednesday.

The need to add Wilson came after Taylor Trammell was placed on the 10-day injured list with a right hamstring injury and the impending suspensions for outfielders Jesse Winker and Julio Rodriguez.

“He can play any of the three outfield positions and certainly play the midfield if Julio needs a day,” Servais said. “And Julio might get one day; we will find out here soon. That’s the big thing is (Wilson) playing in the outfield; he’s a good runner and a pretty aggressive guy.’

Wilson was sitting on the roof of his residence with friend and teammate Joe Odom when he received a call at 10:30 p.m. from Rainiers manager Tim Federowicz

“It’s not like he’s just calling for something,” Wilson said. “After he told me, I blacked out and then I started crying. I’ve been waiting for this call for eight years. It was a lot of hard walking and grinding and grit. It all pays off, you know?”

When he was finally able to calm his emotions and wipe the tears away, Wilson went downstairs and told his wife and facetimed his mother. More tears were shed from everyone.

“My mom has watched me play ever since I picked up a bat in the tee ball,” Wilson said. “You can just see it in her eyes. All that emotion comes out. There is nothing like it. There really is nothing quite like it.”

Even though he’s been in the minor leagues for so long, it’s not like Wilson is an unknown product. He was a standout player for California baseball powerhouse Junipero Serra High School in Gardena.

The Diamondbacks selected him from high school in the second round of the 2014 MLB draft. In April 2019, he was sent to Boston in a trade for catcher Blake Swihart. The Red Sox added him to their 40-man roster for the 2020 season, but he didn’t play due to the minor league season cancellation. He looked set to make his debut sometime in 2021, but when the Red Sox took over reliever Hansel Robles on July 30, he was sacked and the Mariners claimed him from waivers.

After finishing the 2021 season with Tacoma, the Mariners put him on their cab squad for their potential post-season roster. But they came up two games short. They assigned him in October to an assignment to clean up the roster. Rather than try free agency, he accepted the outright assignment and remained in the organization.

After a slow start with the Rainiers, he has become hot lately, with six doubles and five homeruns in his last 17 games.

“I was just trying to find my pass,” he said. “Sometimes I’m known for starting slow and eventually getting into my stride for about 100 at bats. So I’m just looking to build on that and help the team win by any means necessary.”

206-464-2373 or [email protected]; on Twitter: @RyanDivish† Ryan Divish covers the Mariners in Seattle and on the road. During the season, look for his “Extra Innings” podcast and the weekly Sunday Mailbag.