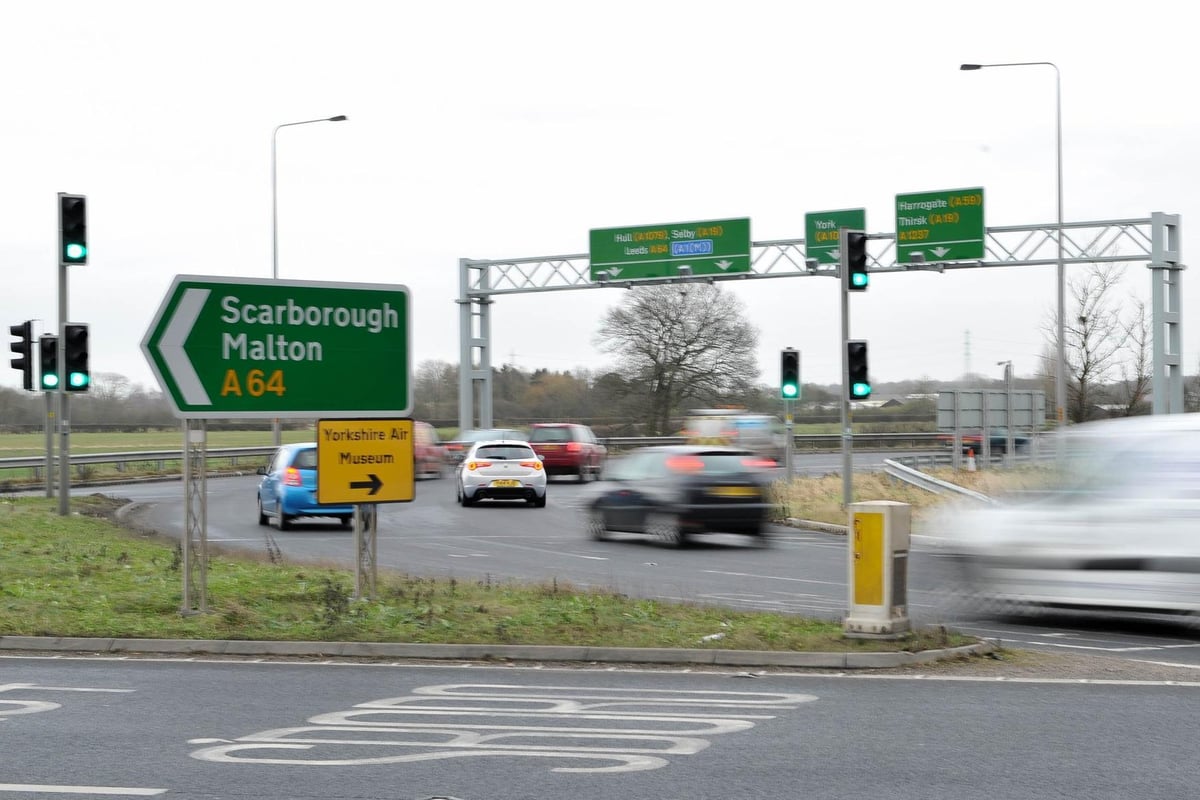 The scheme includes three different options for improving traffic flows on the congestion blackspot between York and Malton.

There were originally four proposals, but option B has already been dropped. It would involve a partial upgrade of the dual carriageway to Towthorpe Lane, where a new roundabout would have been built, but was rejected despite the lower cost as it ‘didn’t solve the congestion problem’.

National Highways said: “The upgrade being developed for the Hopgrove Junction would replace the existing Hopgrove and Malton Road roundabouts with a single extended and

marked roundabout. The new roundabout would widen the existing north and south legs of the Hopgrove A64 roundabout.

“A new thoroughfare would be added so that vehicles traveling north could drive straight over the roundabout instead of having to go around the roundabout heading west.

“There is also a new ramp to the left from the Hopgrove roundabout towards Malton Road, northbound. For options C and D, traffic would no longer be able to access the existing A64 from Hopgrove Junction as the existing A64 would become capped off at the Traffic that wants to connect to the existing A64, it does so via a new junction at Towthorpe Moor Lane.

“New crosswalks with traffic lights would provide safer and easier crossings for pedestrians, cyclists and other non-motorized users. These facilities would connect to existing routes south of the interchange.”

All options would take 2-3 years.

– The existing single carriageway would be doubled from a point 500m north of Hopgrove Junction to the existing dual carriageway at Barton-le-Willows, avoiding property where possible.

– All existing right turns on this part of the road will be removed and traffic can only turn left. The three major intersections would provide road bridges to allow vehicles to cross the roadway.

– Access to the dual carriageway would take place via a limited number of intersections. Nodes are proposed at the following locations (from south to north):

– Junctions 2, 3 and 4 are only accessible via a left bend and form a bridge over the carriageway. These are called grade-separated intersections. Junction 1 would be a left-in, omitted intersection on both carriageways (north and south), but no bridge is envisaged, meaning traffic can only travel in one direction when exiting the intersections.

– A number of direct accesses to the A64 for a number of residents and companies will be closed to increase safety. Instead, access to these buildings would be available through new links to the local road network.

– Access to the new road will take place via a limited number of junctions. Left-turning junctions with bridges over the carriageway (grade-separated intersections) are proposed at the following locations (from south to north):

existing A64 and Sandy Lane.

At these nodes, traffic coming from the

secondary road to only turn left onto the dual carriageway.

As such bends to the right, requiring an opening in the

central reservation and allow dangerous turns to the right

oncoming traffic, are not possible with this one

intersections. These nodes would be on the

– Access to buildings on both sides of the new road would be maintained via new connections to the local road network, following the location of new interchanges. Because a new four-lane road is being built, the current A64 can be used as a local access road.

– Traffic coming from the existing A64 would reach Hopgrove Junction via the new dual carriageway, which can be accessed from any of the junctions.