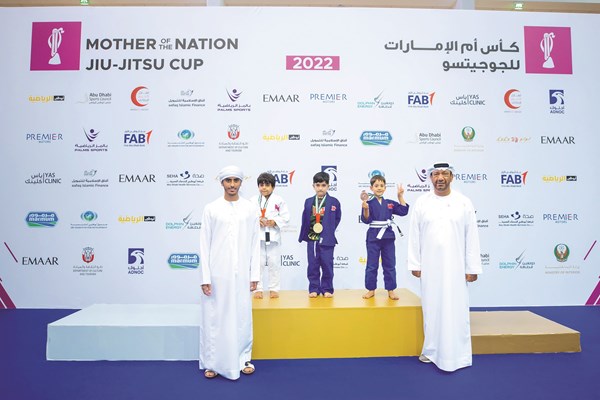 In a distinguished atmosphere of enthusiasm and encouragement, the Ju-Jitsu Arena, in Zayed Sports City in the capital Abu Dhabi, today (Friday) witnessed the matches of the Young Talents Festival, held as part of the activities of the “Mother of the Nation” Cup for jiu-jitsu, in which hundreds of children of different nationalities participated.
The festival witnessed the participation of approximately 400 male and female players from the various clubs and academies of the country aged 4 to 13, in a move that aligns with the Federation’s efforts to promote the dissemination of sport among the promote younger age groups because it is the future of jiu-jitsu in the country.
The Junior Festival and other activities for children are of great importance within the Federation’s agenda, as one of the main pillars for developing the game and supporting the strategic stock of national teams in the coming years. and professional category competitions, which help provide them with the necessary expertise to begin their professional career in a distinguished environment that helps them grow and develop.
The festival competitions were attended and the winners were crowned by Sheikh Zayed bin Nahyan bin Zayed Al Nahyan, Mohammed Salem Al Dhaheri, Vice President of the Jujutsu Federation, and Amal Afifi, Secretary General of the Khalifa Award for Education.

Mohammed Salem Al Dhaheri praised the large turnout to participate in the festival, which reflects the growing awareness of this sport and its importance, and emphasized that the game has conquered its place in society and has become a way of life for all segments of society, and Emirati families eager to join with the Federation to help establish strong generations of achievement.
He said: “Since the start of the season, the Federation has been eager to include a series of tournaments for children and youth based on its belief in their role in shaping the future of jiu-jitsu in the country, as the buttons of today are the heroes of tomorrow, and this scene confirms with the expressive public painting that we are on the right track, within a clear plan to develop further, in line with our future goals to reach and maintain the top, and prepare us an Emirati generation capable of dazzling and winning titles in the most important world championships, with the unrestricted support of rational leadership.
The Junior Festival matches were characterized by a large audience presence, with families making up the bulk, as they flocked to encourage and motivate their sons and daughters to take the win.
Muhammad Saleh Al-Hashemi, father of the player Khaled “White Belt”, said that such wonderful events are an outlet for both families and children, and allow parents to monitor the development of their children’s performance in this valuable sport, especially since his son takes part in the Federation children’s championships for the fourth time.
He added: Since my son started playing this sport, we have seen a positive change in his personality, his confidence has improved, and he has become more balanced, disciplined and able to make decisions.
Lea, the mother of the player Karim Al Hindi, in turn praised the atmosphere of the competitive tournament. the willingness and interest of the union for the new generations.
She added: “Ju-Jitsu has contributed to the refinement of children’s personalities and saved them from many challenges faced by the current generation, especially the virtual world, the Internet, electronic games and their negative effects on young people. “
For his part, Alan Patrick, father of the player Jasmin “Yellow Belt”, who has participated in several tournaments before, said: Abu Dhabi offers the best ways to develop talent as it hosts the most prominent international tournaments and a large number of academies and clubs with great abilities that help players develop, the Federation does a great job and gives equal opportunity to all players. If you have talent and determination, you will achieve your goal.
He added: I expect a bright future for my daughter because she lives in a country that is developed in all areas, and we have a lot of talent in Brazil, but we don’t find this interest in training programs, championships and coaches. thank uae leadership and people.
On the other hand, the “Mother of the Nation” Jiu-Jitsu Championship kicks off tomorrow, with the participation of hundreds of female players from various clubs and academies across the country.
The competitions will be held in 3 categories: women under 16, young women under 18 and adults over 18. The tournament is expected to experience a lot of competition and enthusiasm in light of the participation of the elite ranked players and members of the national team.
Al Wahda, Al Ain, Sharjah Self-Defense Sports Clubs, Al Jazira, Palms Sports Academy and Team 777 are looking to compete for one of the top three places.