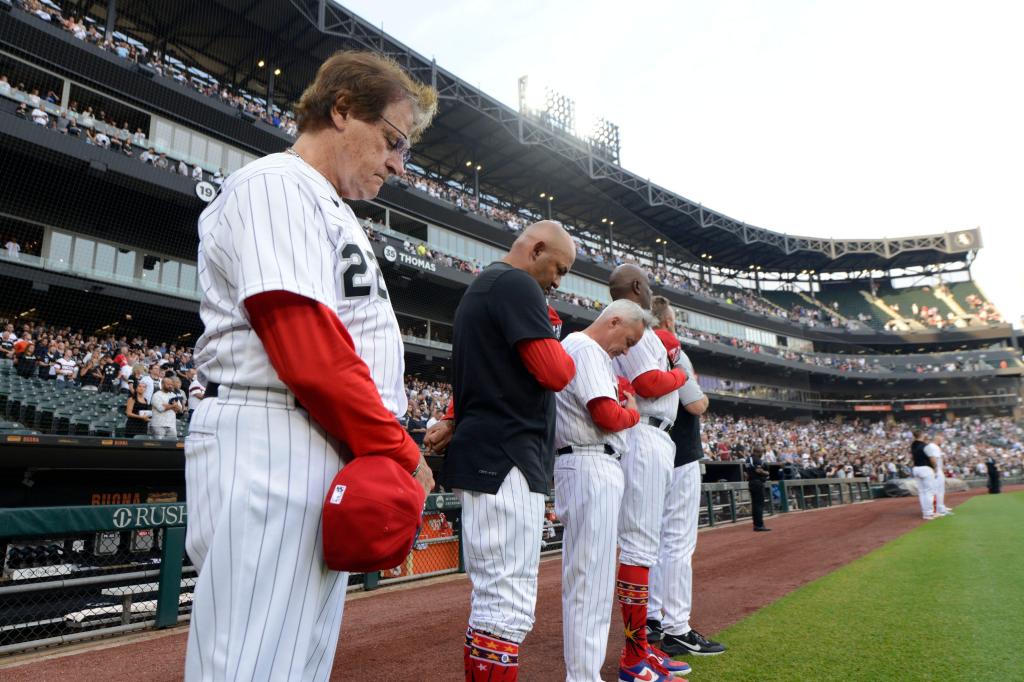 About 3½ hours before the Chicago White Sox met the Minnesota Twins Monday to kick off the biggest run of the season, manager Tony La Russa’s pregame media session competed in the dugout with a singer practicing over the Guaranteed Rate Field sound system.

La Russa began discussing the mass shooting during a Fourth of July parade in Highland Park that killed seven people and injured more than 30 others.

The singer started by releasing a slow version of ‘The Star-Spangled Banner’.

“At the last gleam of twilight,” she sang.

“Whose broad stripes and bright stars…”

“Did they find him?” La Russa asked reporters. “Did they catch him?”

“Because of the perilous battle…”

“No,” a reporter told La Russa. The suspect was still at large at the time.

“O’er the ramparts we looked upon flowed so gallantly…”

“Was there talk of canceling the match?” La Russa was asked.

“And the missiles are shining red, the bombs are bursting in the sky…”

“There was a conversation with MLB,” said La Russa.

“And they decided we would play. It has been thought about.”

“That our flag was still there…”

Did La Russa think the game should be played?

“Oh, say, does that star-studded…”

The decision-makers were “very much aware of the bigger picture,” La Russa replied. ‘When they say play. I think we should play.”

“And the home of the brave.”

“The whole town isn’t going to stop, so… But I know it’s been considered.”

The national anthem ended. Back in the Sox dugout, the conversation turned to the crucial upcoming homestand against first place Twins and Detroit Tigers.

There would be baseball because, well, I don’t really know what happened in the decision of MLB and the White Sox. Maybe it was because the Sox had already sold over 30,000 tickets, and there were Paul Konerko bobbleheads to be handed out. Perhaps baseball decided fans needed a distraction after the horrific news of the day.

Anyway, a nice crowd of 32,483 showed up despite the rain for the game. After a minute of silence for the victims of the Highland Park massacre, it was game on.

The press’s TVs were tuned to the game, but many of the reporters were monitoring the news from Highland Park from their devices. The show must go on, and a job is a job. But when gun violence strikes so close to home, it’s impossible to focus on the game below, regardless of the stakes.

As it turned out, it was one of those crazy, crazy nights the Eagles used to sing about, and the game itself was fun to watch – albeit maddening – for most Sox fans.

After the Sox tied the game at 2 in the seventh inning, the Twins pulled an unlikely 8-5 triple play in which midfielder Byron Buxton made a running grab and fired at third baseman Gio Urshela, who tagged Yoán Moncada and the second hit base. for the last two zeros. Adam Engel and Moncada would be destined to see their gaffes replayed on ESPN’s “SportsCenter” for the next 24 hours.

La Russa’s jaw dropped in a meme-worthy moment captured by the NBC Sports Chicago cameras as he witnessed the result. It was a look shared by nearly everyone in the press box, not to mention thousands of unbelieving Sox fans who thought they’d seen it all.

“Never seen anything like it,” La Russa would later say.

Didn’t have anyone else either. Researchers tweeted that it was the first triple play of its kind in baseball history. When vintage cars say you can go to a baseball game and see something that has never been seen before, believe them.

After the Sox ran themselves out of the inning in the most spectacular fashion, the Twins scored four runs in the 10th inning to secure a 6-3 win. La Russa would be asked to leave the field by the home plate umpire after complaining about the strike zone for Joe Kelly, who imploded during a performance he described with an expletive.

Some of the fans briefly chanted “Fire Tony,” even though La Russa wasn’t in the dugout to hear them. Many fans began to clear up after Kelly, who gave up four runs while eliminating two batters, was pulled by bench coach Miguel Cairo. When Tim Anderson struckout to end the game in the bottom of the tenth inning, the margin quickly ran out.

The post-match fireworks show had already been canceled after the Highland Park tragedy. But on the other side of the Dan Ryan, departing fans could catch a glimpse of smaller fireworks displays. The reporters went downstairs for their post-game interviews, where La Russa, Kelly, Engel, Johnny Cueto and José Abreu gave their verdict on the game and the current state of the Sox.

It was just another day at the park.

It was just another day in America.