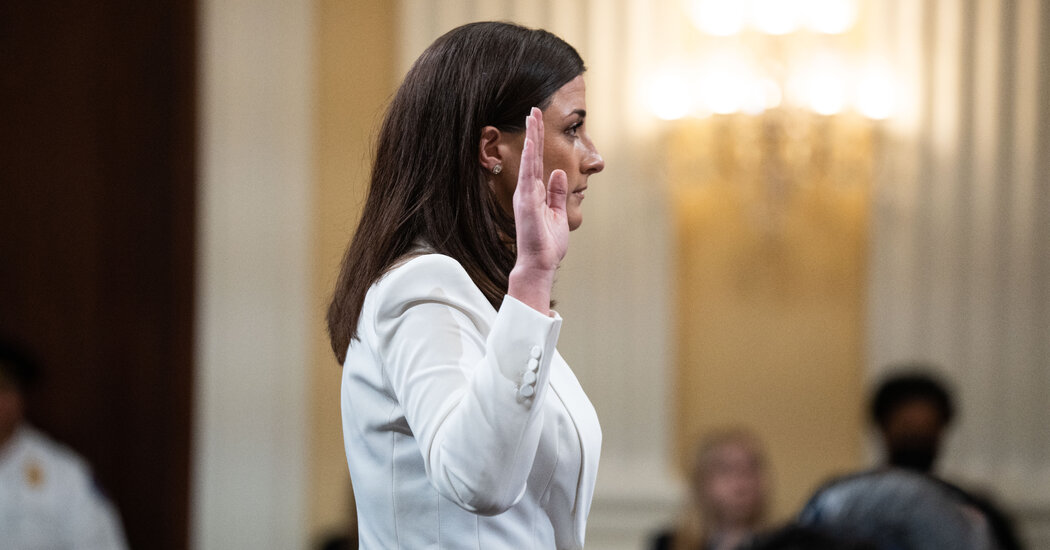 Ms. Hutchinson testified that Mr. Trump knew the crowd he gathered in Washington on January 6, 2021 was armed and could become violent, but encouraged them to march to the Capitol anyway, saying she had heard that he to one of his Secret Service agents when he was told he could not join his supporters on Capitol Hill.

And she shared how her boss, Mark Meadows, was seemingly unfazed by reports of violence on Capitol Hill, even as other Trump aides became annoyed.

Below is a timeline of key moments from January 6, as detailed in her testimonial.

Mr. Meadows and Mr. Trump are informed that those present at the president’s meeting are armed.

“Tony told me something along the lines of, ‘These f-ing people attach spears to the end of flagpoles,’” Ms Hutchinson testified.

Mr. Meadows seemed unmoved and only asked if Mr. Ornato had passed the information on to the president. Mr Ornato replied that he had, Ms Hutchinson said.

Early that afternoon, Ms. Hutchinson texted Mr. Ornato that Mr. Trump was “furious” that rally-goers were being forced to pass through magnetometers, according to reports she provided to the committee. Backstage at the rally at the Ellipse, she heard Mr. Trump angrily tell his aides to let his supporters enter the event space, fearing the area looked empty.

Mr Trump, she testified, said “something along the lines of, ‘I don’t care if they have guns. They’re not here to hurt me. Get the warehouses out. Let the people in, they can go from here. march to the Capitol.’”

White House officials find out that the Capitol Police Department was at risk of being “overrun” by rioters.

While Mr. Trump addressed his supporters in the Ellipse, backstage, Ms. Hutchinson overheard Secret Service agents reporting that Trump supporters harassing the Capitol came close to the building, and it became apparent that “Capitol security would are not enough” to hold them off, she testified.

When she was with Mr. Meadows arrived to tell the Capitol Police were “overrun” by rioters, “almost lacked response,” Ms Hutchinson testified.

“I remember him saying, ‘Okay,'” she said. “Something along the lines of, ‘How long does the president have left in his speech?'”

Representative Kevin McCarthy of California, the leader of the House of the Republicans, angrily calls Ms. Hutchinson and tells her not to let Mr. Trump come to the Capitol.

After Mr. Trump told those in attendance that he planned to march to Capitol Hill with them, Mr. McCarthy furiously called Ms. Hutchinson, testified and demanded to know why he had been misled.

“You’ve been telling me all week you’re not coming here. Why would you lie to me?” said Mr McCarthy, according to Mrs Hutchison.

Mrs. Hutchinson said she replied, ‘I didn’t lie to you, sir. We’re not going to the Capitol.”

He said, ‘Well, he just said it on stage, Cassidy. Figure it out. Don’t come up here,” she said.

After Ms. Hutchinson returned to the White House from the meeting, she said that Mr. Ornato and Mr. Trump’s chief of security, Bobby Engel, had described to her a shocking scene that had taken place in the president’s vehicle.

After telling him after his speech that he couldn’t go to the Capitol for security reasons, Mr. Trump became “mad” and said “something along the lines of, ‘I’m the f-ing president, take me to the Capitol now,'” Ms. Hutchinson testified that she was told.

When Mr. Engel replied that they had to get back to the White House, Mr. Trump “reached out to the front of the vehicle to grab the steering wheel,” and jumped out at him, Ms. Hutchinson said.

White House counsel warns Meadows, “Something has to happen or people will die.”

Ms. Hutchinson testified that while she and other White House staff were glued to the television watching the Capitol scene grow increasingly violent, White House counsel Pat Cipollone stormed into Mr. Meadows’ office and said something. with the meaning of “The rioters have reached the Capitol, Mark. We have to go down to see the president now.”

Key Revelations from the January 6 Hearings

Mrs. Hutchinson testified that Mr. Meadows looked up to Mr. Cipollone and said, “He won’t do anything, Pat.”

Mr Cipollone replied, according to Mrs Hutchinson: “Something has to be done or people will die and the blood will be on your hands. This escalates. I’m going downstairs.”

After Mr. Meadows and Mr. Cipollone emerged from a meeting with Mr. Trump in the dining room in the West Wing, Mr. Cipollone was still frustrated, Ms. Hutchinson said, recounting a conversation between the two men that she had overheard.

“I remember Pat saying something along the lines of, ‘Mark, we need to do more. They’re literally calling for the vice president to be hanged,” she testified. “And Mark had responded along the lines of, ‘You heard him, Pat. He thinks Mike deserves it. He doesn’t think they’re doing anything wrong. to do.'”

Mr Trump tweeted that Mr Pence “didn’t have the courage” to undo the election.

Just minutes after the mob broke into the Capitol, Mr. Trump launched an attack on Vice President Mike Pence for refusing to support Joseph R. Biden Jr.’s election victory. declined, posting on Twitter: “Mike Pence didn’t have the courage to do what should have been done to protect our country and our Constitution.”

In one of the most emotional testimonies of the day, Ms. Hutchinson said she saw the post and felt “disgusted”.

“It was unpatriotic. It was un-American. We watched as the Capitol was defaced for a lie,” she said.

White House officials prepare a statement denouncing the rioters who broke into the building, but it is never released.

After Mr. Meadows and some of Mr. Trump’s lawyers sat together in a meeting, Mr. Meadows began dictating a statement to Ms. Hutchinson that they hoped the president would release, detailing the actions of rioters who violated the Capitol. called “illegal”.

The statement was never released.