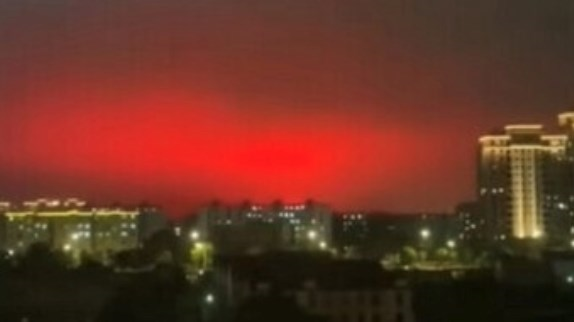 Chinese activists released a video clip from Zhoushan, near Shanghai, showing the city’s sky turning red under thick layers of fog, sparking panic in the hearts of residents.

The clip showed the voices of residents capturing the color change of the horizon, sparking their fear, not understanding what was happening, as the color of the sky turned scarlet red without warning.

The red sky has become a trending topic on Twitter-like social media in China, such as Sina Weibo, with over 150 million views.

Also, users of the Douyin app, the Chinese version of Tik Tok, described the red sky as an ominous omen due to China’s handling of the Corona pandemic, which appeared in neighboring Shanghai.

One user said this means “accidents” and another added: “I started hoarding supplies,” according to the British newspaper Daily Mail.
But local media explained that the strange weather phenomenon was the result of light refraction.

In turn, Zhoushan Meteorological Bureau officials explained that the phenomenon occurs “when the weather conditions are right, more water in the atmosphere forms a fog that refracts and dispels the light from fishing boats and creates a red sky,” according to the “World Time.” “.

fishing boat light
At the same time, local media, citing the Zhoushan Aquatic Products Company of China, which owns fishing boats, suggested the lighting may have come from a fishing boat associated with it in the Pacific Ocean.

Online researchers said the particles came from the 2022 volcanic eruption in Tonga, which turned out to be the largest volcanic eruption of the 21st century so far, and could also have contributed to the refraction of light.

Historians have recently uncovered documents dating back to 1770 from China, Korea, and Japan, where eyewitnesses reported that the sky turned an eerie red.

The researchers told Live Science that geomagnetic storms, triggered by solar eruptions hitting Earth’s magnetosphere, may have triggered the event.

For their part, Chinese state media said that solar and geomagnetic activity was calm on Saturday and that there were no major anomalies in solar activity, denying the idea that a geomagnetic storm and sun were coloring the sky red in Zhoushan.

During the Carrington event of 1859, the deadliest geomagnetic storm on record, electric currents in the atmosphere broke telegraph wires and set paper on fire.

Experts believe a similar geomagnetic storm today would destroy power grids around the world, leaving millions without light or electricity.