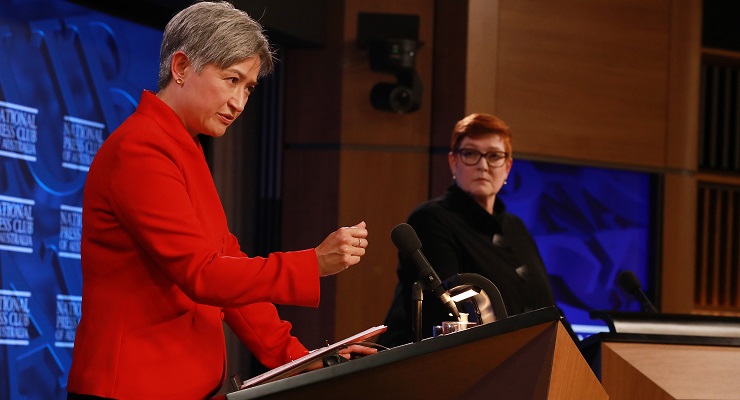 It would be misleading to say that Marise Payne and Penny Wong had an argument at the National Press Club this afternoon. The foreign policy debate between the Foreign Secretary and her Labor colleague was by far the most civil, constructive exchange we have seen during the campaign.

Perhaps a coincidence that this is the first major debate to date with two (or only) female politicians.

But it’s also a reflection that, among the sometimes hairy rhetoric about China – where the government has absurdly accused Labor of playing ‘appeasement politics’, Deputy Opposition Leader Richard Marles has been labeled a ‘Manchurian candidate’ and Anthony Albanian Beijing’s favorite choice for prime minister) — the two parties are pretty much in line when it comes to foreign policy.

Some of those attacks were most outspoken by Defense Secretary Peter Dutton during a similar press club debate against his Labor counterpart Brendan O’Connor last week.

“We are all patriots,” Wong said early in the piece today. “Mr Morrison and the Liberal Party do not have a monopoly on patriotism.”

Unsurprisingly, key differences emerged in the Solomon Islands, where Wong Payne sought to push for inconsistency within the country’s government, and the significance of Prime Minister Scott Morrison’s comments that a Chinese base is a “red line.” would be for Australia.

“It means there are certain key security issues, such as the presence of a Chinese military base in our region, that would be of deep and fundamental concern to Australia,” Payne said.

Wong also opened with a promise to appoint an ambassador to First Nations peoples.

“We will ensure that First Nations peoples have a stronger voice in our engagement with the world, and deepen their long-standing ties between the countries of the Indo-Pacific,” she said.

But not long after Payne and Wong were liquidated, Dutton surfaced with his own national security update: a Chinese surveillance vessel had been spotted off Western Australian waters.

Impeccable timing, although the defense secretary was dubious about whether the election had anything to do with it.

“I think it’s an act of aggression,” Dutton said.

Any chance, then, that today’s civility could go out the window in the last week as a desperate coalition escalates its attack on Labor over defense and national security.

There was also a hint of desperation around Morrison’s press conference this morning (which was later hijacked by a man dressed as Kim Jong-un) where he promised voters, just a week before the election, that he would change when he returned to office.

“I know Australians know I can be a bit of a bulldozer when it comes to problems and I suspect you know that too,” the prime minister said.

“As we move into this next period on the other side of this election, I know there are things that will have to change with the way I do things.”

It was a rare moment of remorse from Morrison. But it might well be too late.