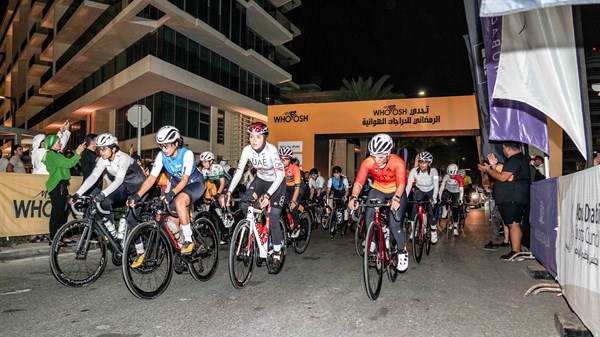 Abu Dhabi (Etihad)
The “Wash” Ramadan Cycling Challenge, the community race dedicated to the citizen category, organized by the Abu Dhabi Sports Council in partnership with “MyWash”, witnessed great success with the participation of 181 male and female participants (149 men – 32 women), in a distinctive Ramadan atmosphere and strong competition among all participants.
The challenge, which was part of the agenda of community sports events organized by the Abu Dhabi Sports Council, to encourage physical activity, spread cycling culture and expand the base of its practitioners, was launched from Saadiyat Island over a distance of 67 km, specifically from Ahmed Bin Khaled Street near the picturesque Saadiyat Beach Walk, via Jacques Chirac Street, Louvre Abu Dhabi Museum and the Cultural District, to Yas Island via Sheikh Khalifa Bin Zayed Street, to Al Reef District, and back again from the same road to the start line.
Abdullah Al Hammadi won first place and the prize of 50,000 dirhams, after covering the distance of the race in a time of 1:31:31:10. The third, with a prize of 20,000 dirhams, was Walid Al-Naqbi, with a time of 1:31:32:68.
In women’s singles, Sheikha Rashid won first place and the prize of 50 thousand dirhams after covering the same distance in 2:01:24:11 hours. Safia Al-Sayegh won the second place and the prize of 30 thousand dirhams with a time of 2. :02:53:88 Farah Al Marri finished in the third place and won the Dh20,000 prize after covering the distance in 2:05 :54:58 had traveled two hours.
In the teams (men) category, the Abu Dhabi Cycling Club team (A) came first, the Dubai Police team second and the Al Shafar Jumeirah team third. In the team category (women), the Al Shafar Jumeirah team came in first, and the Abu Dhabi Cycling Club team came in second.
The crowning of the winners was attended by Aref Hamad Al Awani, Secretary General of the Sports Council of Abu Dhabi, Mansour Bouasaiba, President of the Emirates Cycling Federation, Ahmed Al Tunaiji, representative of MyWash, Suhail Al Arifi, Executive Director of the events sector at the Abu Dhabi Sports Council, and Jonathan Emery, CEO of Aldar Development Company.