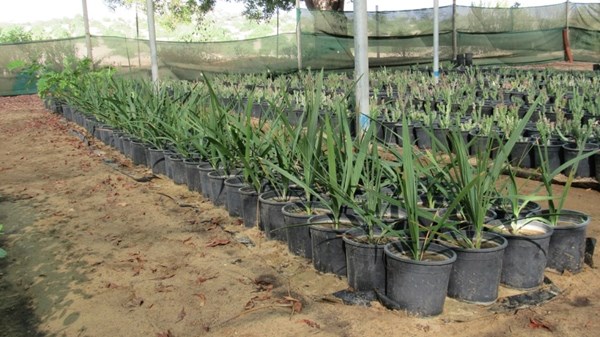 Ihab Al Rifai (Al Dhafra Region)
The Environment Agency – Abu Dhabi is implementing a plan to conserve and protect the local environment’s plants from extinction as part of its drive to protect the local wild plant species in the Emirate of Abu Dhabi, which comprise 58% of the wild plants in the land, and given the many ecological and economic benefits these plants have. These wild plants are considered economic pastoral plants in their natural environment, providing wild and pastoral animals with an important and important food source in the meadows. These efforts include establishing a nursery specializing in the propagation and conservation of local plants at the authority, which produces more than 500,000 seedlings of wild plants annually in the Baynunah area of ​​the Al Dhafra region. , and many others, where the resulting plants are used in the Authority’s various operations and in various sites and game reserves with the aim of botanically enriching them and expanding their role as important habitats that contribute to the conservation and development of native fauna. which were launched as part of conservation programs such as the Houbara in the Barqa Reserves, the Natural Falcons, the U-Dibsa Natural and the Houbara, Nature Reserves and other sanctuaries.
The Environment Agency relies on various methods to improve natural vegetation cover, namely establishing new reserves or extending existing reserves within a network of nature reserves covering different habitats in the emirate, increasing the impacts of various human activities leading to an improvement of the local vegetation cover. An example of this is the return of life to the Ghada shrubs in the Al Ghada Nature Reserve, in addition to the positive development of the vegetation covers of the habitats of drought shrubs such as Al-Ramth and Al-Ratha, along with large groups of annual and perennial plants. , within all the different reserves in the Al Dhafra region, the most important of which are the Al Houbara Nature Reserve, the Barqa Al Falcon Reserve, and others. †
According to Environment Agency statistics, the Emirate of Abu Dhabi includes 438 species of native plants, of which 434 are terrestrial plants and 4 marine plants. They are endangered to varying degrees, leading to their decline, leading to the Commission drawing up plans to conserve these species and ensure their sustainability.