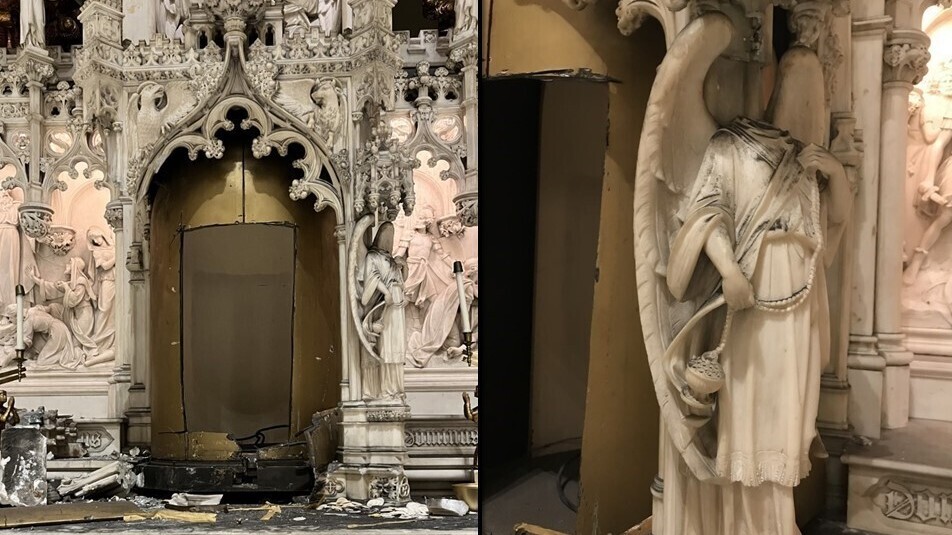 Police say someone broke into the altar of a New York church late last week, stole a $2 million gold relic and removed the head of a statue of an angel.

The incident took place between 6:30 p.m. Thursday and 4:00 p.m. Saturday at St. Augustine’s Roman Catholic Church, known as the “Notre Dame” of the Park Slope neighborhood of Brooklyn.

The church was closed at the time for construction work. CCTV footage from the church’s security system was also stolen, the church pastor said.

The Brooklyn Diocese called it “a blatant crime of disrespect and hatred.”

The diocese said the thief or thieves had cut a metal protective casing and made off with a tabernacle dating from the church’s opening in the 1890s.

The tabernacle, a box of Holy Communion items, was made of 18-karat gold and decorated with jewels, police and the diocese said. It is valued at $2 million.

The diocese said it is irreplaceable because of its historical and artistic value.

It is described as a “masterpiece and one of the most expensive tabernacles in the country, guarded by its own security system,” which includes an “electronically operated burglar-proof safe” and two-inch thick steel plates that “entirely enclose the tabernacle.

Statues of angels flanking the tabernacle were beheaded and destroyed, the diocese said. A safe in the sacristy, where priests prepare for Mass, was also cut open, but there was nothing inside.

The Holy Eucharist, the bread consecrated as the body of Christ, was taken from the tabernacle and thrown on the altar.

“This is devastating, as the Tabernacle is the focal point of our church outside of worship, with the Body of Christ, the Eucharist, delivered to the sick and housebound,” said Rev. Frank Tumino, the pastor of St. Augustine in a statement from the diocese.

“To know that a burglar has entered the most sacred space of our beautiful church and gone to great lengths to break into a security system is a horrific act of disrespect,” Tumino said.