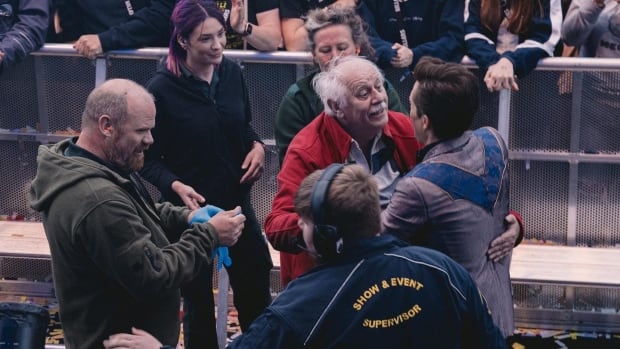 Transcript of the story

A British retiree stole the show at a Killers concert this weekend when he decided to crowdsurf for the first time.

Doug James, 67, is no worse with wear after he fell and hit his head during Saturday’s show at the Old Trafford cricket ground in Manchester, UK, prompting frontman Brandon Flowers to pause the performance and check on him.

Then the band tweeted, “There’s no age limit for rock ‘n’ roll.”

“I think that’s absolutely true,” James told As it happens guest host Catherine Cullen. “It’s a fantastic sensation. You know, you’re trying to become one with the crowd.”

There is no age limit for rock ‘n roll! pic.twitter.com/5k5ebjecIk

Lifelong rock fan, James was at the show with his son, who introduced him to The Killers, and his new daughter-in-law.

During the opening act, he saw the crowd lift a woman in a wheelchair so she could see better. Then he decided that he too would like to be lifted up by his fellow rock fans.

He told the “strong guys” around him that he wanted to crowdsurf, and off he went.

‘That’s me Daddy! Be careful!’

In fact, the audience moved James all the way to the front of the stage, with his son frantically chasing after him, trying in vain to keep an eye on him.

James, meanwhile, was lost in the moment, on the adrenaline rush. He had no idea how far he had traveled until he felt himself fall backwards, fell and hit his head.

“Before I know it, I’m on the ground, as it were, on the wrong side of the security barrier,” he said. “And I thought: I’m in trouble here.”

Unfazed by the fall, he rose and began to wave to the roaring crowd. He had no idea, he says, that Flowers had shut down the show and was standing right behind him.

Flowers gave James a big hug before a paramedic came to escort him away and check his head. He’s doing fine, he says.

When asked why he waited until retirement to try crowdsurfing, he said there’s just no time for fun things when you’re working all the time.

In addition, his son had just married, the pandemic lockdowns were finally lifted and he was excited to celebrate.

James says he likes live music and has more outings planned during his retirement. Though he doesn’t expect to make such a big splash at his next show.

“I’m going to see swan lake‘, he said. “I have to behave my best, so there will be no crowdsurfing.”