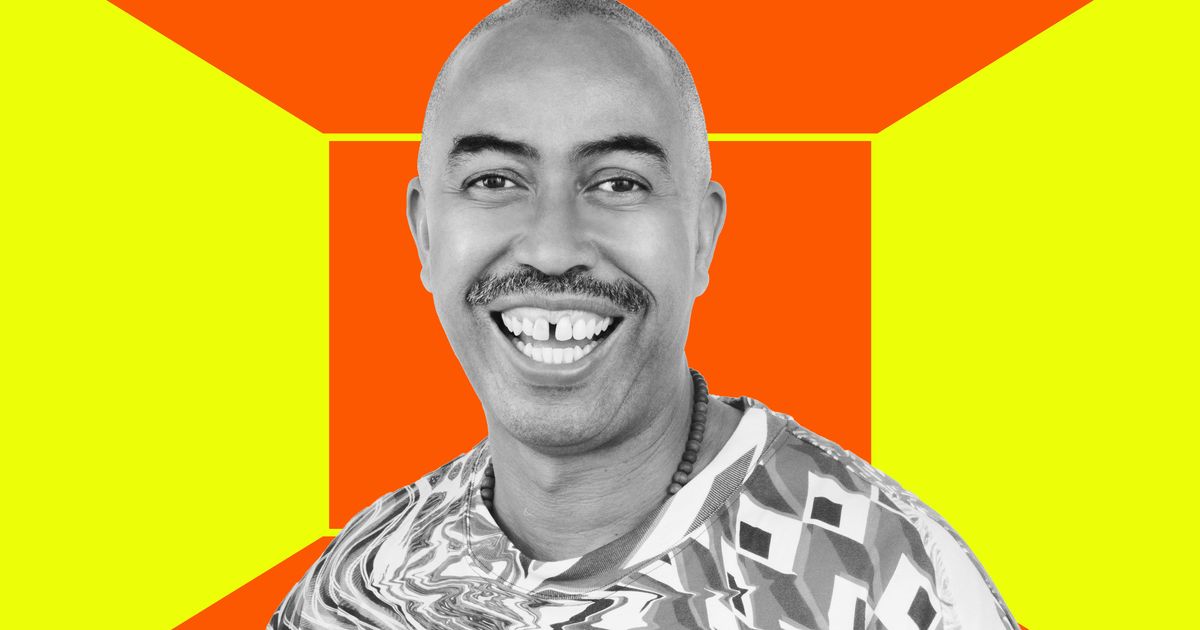 Photo illustrations: slowed down; Photo: Courtesy of the artist

Many of us did small home improvement projects during the pandemic, but educator and industrial designer Stephen Burks seized the “shelter in place” order as an opportunity to invent new furniture: a woven “closet” for a flat screen, a small memorial altar based on Southeast Asian spirit houses to help his son mourn deceased relatives, and pedestal-like stands for small electronics his partner, the cultural strategist Malika Leipercan their living room to a home office. Those pieces, and more, are part of “Shelter in place,” a new retrospective at the High Museum in Atlanta, running through March 5, 2023.

What’s hanging above your couch?
A large photo of Paul Mpagi Sepuya from his Screen series.

What’s the first job you had in New York?
At the risk of dating myself, I did displays for Barneys in the early 90s. The store always had those funny window displays and it was like you were always in Christmas window mode and coming up with crazy ideas. As a young Chicago student, it was exciting to see the inner workings of presentation and display on the scale of the Madison Avenue flagship.

What color are you always attracted to?
Warm colors attract and comfort me, so the orange, red and yellow side of the spectrum. Terracotta is my favorite color of all.

Which artwork or artifact are you most surprised to own?
I recently received a large log from the designer Jonathan Muecke. It is a solid oak cube with intricate joinery that must weigh 200 pounds. It’s really stupid in the simplicity of the idea, but it’s incredibly sophisticated in the execution. I remember when I took it home I thought, This is just a big block of wood. You don’t want to talk about how much it costs or what it does. It has become a side table that someone occasionally bumps their toe on.

Which New Yorker would you like to hang out with?
About 20 years ago I met Fran Lebowitz at a party. She was the most New Yorker of all New Yorkers I’d ever met. I know it’s hard to believe, but we spent hours talking about the most mundane things in the funniest way. I couldn’t believe I was talking to her there. It was kind of romantic in a comedic, intellectual way. But at one point she apologized and I never saw her again. I’d love to pick up that thread with her.

What’s the last thing you made with your hands?
Our practice is called Stephen Burks Man Made, so everyone thinks we make everything by hand, but we’re not; we integrate what we consider to be handcrafted techniques into industrial production. But throughout August we made prototypes of the “Shelter in Place” project for the Hoge Museum.

Is there one thing you have multiple versions of?
I am a huge Dries van Noten fan. When he introduces T-shirts, I always buy two. The most flattering question I get when I wear them is: Did you make that? It’s like, Wow I wish I had that.

Which museum in New York City do you always go back to?
The Whitney. I’m not the biggest fan of the Renzo Piano building – it’s kind of like a boat, isn’t it? – but I love the large column-free galleries and outdoor spaces.

What do you always have next to your computer?
A large Blue Bottle New Orleans iced coffee. It’s like the chocolate milk of coffee. As my son likes to remind me, I am addicted.

Where is the best view of the city?
The Empire State Building, if I could stand the lines and throngs of tourists.

What building or object do you want to redesign every time you see it?
I am never really satisfied with the result of my own work, no matter how successful it is. Whenever I come across my old things, I’m happy – it’s like a surprise to meet an old friend – but I sit there and study them and rethink all the details and how I would do things differently today. It’s an internal obsessive-compulsive exercise that I do alone and try not to reveal to others at the risk of sounding crazy.

What would you change about your field?
The existing standard of 3 percent royalties for the furniture industry was established in the late 1920s by Gilbert Rohde and Herman Miller, and has fundamentally not changed in 100 years. At the time, Herman Miller was broke and unable to pay Rohde a design fee, but the designer was so confident in his ability to create something that would sell that he came up with the idea that the designer was only paying 3 percent of the retail price. It’s a bit arbitrary and I think a full re-evaluation of the standard is necessary.

If you could live anywhere in New York City, where would it be?
I like the area around Bond and Lafayette, which is a bit like no man’s land. The scale is great: it feels like you’re in the center of the city, but there’s all this world-class mid-sized residential architecture you see in Europe, but not much in the United States. 40 Bond is my favorite downtown residential building. The green glass facade is killer and the cast aluminum gate is made by sampling graffiti from all over the city.

What would you hoard if it’s no longer being produced?
My mom used to say I have “steak taste on a burger budget”. I know it’s not the way the world goes, but I love a good steak and I’d probably stock up on meat. I’m salivating just thinking about it.

What do you do to get out of a creative rut?
Traveling is my biggest inspiration, so I would just go elsewhere.

Where was your first NYC apartment and how much was the rent?
I moved from Chicago to New York in 1992, to go to Columbia to go to high school, and lived in the East Village on Eighth Street between B and C. I found the apartment on a laundry wall and it cost $600 a month , which is more than any of my friends can imagine paying. It was on the top floor with two windows looking out at the Empire State Building from my bedroom and three windows looking out at the World Trade Center from my bathroom.

Where in the city are you going to be alone?
Central park. It’s my favorite place to be in New York. And of course you are not alone, which is best. Because sometimes it can be a little depressing when you want to be alone; maybe you have heavy thoughts or a problem to solve.

Worst Career Advice You Ever Received?
When I was in high school, I lived and worked in Tokyo for a summer. I didn’t want to go back to New York to finish my master’s degree in architecture, but someone told me to, so I did. But since I am not an architect now and have never practiced architecture, I wish I stayed in Japan. I worked at Idée with Teruo Kurosaki, who discovered Marc Newson and introduced Philippe Starck to Japan. I wish I kept that good thing going.

What have you given away to someone that you wish you could get back?
I had to sell a Lynette Yiadom-Boakye drawing during the recession. It was heartbreaking, but it kept my studio going. A friend bought it from me and he refuses to sell it back even though I don’t even think I can afford it now.

What is your favorite NYC restaurant and what is your regular order?
I struggle with restaurants in New York. Everything is so overhyped, overpriced and the service is crappy. But I love Wo Hop in Chinatown and always order the shrimp egg foo young. It reminds me of the Chicago Chinese food I grew up with.

What descriptive phrase would you like on the headline of your obituary?
“He lived.”