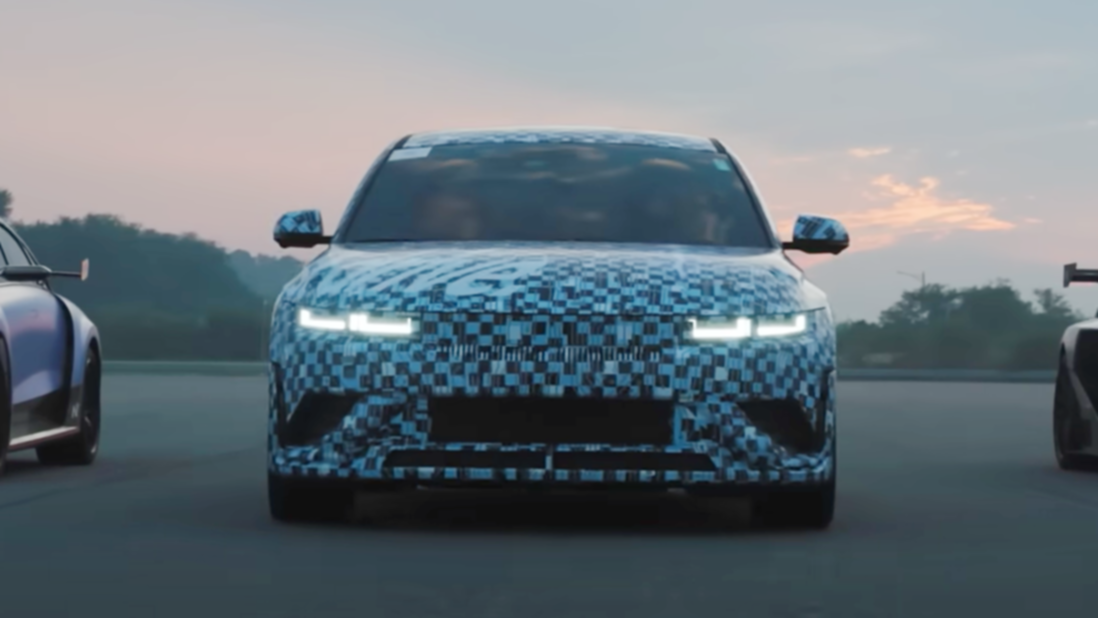 Hyundai teased its upcoming Ioniq 5 N hot electric crossover at the end of a recent video on YouTube promoting the technology behind its RN22e and N Vision 74 “rolling lab” concepts.

As previously reported, Hyundai has confirmed that the Ioniq 5 N will be unveiled in 2023.

The Hyundai Ioniq 5 N, which has been spied several times before in prototype form, can be seen briefly in the video in the typical black and white camouflage.

It has a deeper and more aggressive front spoiler with more front vents, a wider track, wider fenders and a lower ride height.

While we didn’t see the side or rear of this particular Ioniq 5 N in the video, we do know it has a roof spoiler and what appears to be a rear diffuser thanks to previous spy shots.

It’s not confirmed what will power the Ioniq 5 N, but it could offer as much or more performance than the Kia EV6 GT while focusing more on track performance.

Kia recently detailed the series of changes it made to the EV6 to create the hot GT, which has also been put through its paces by the team at Kia Australia and has been fine-tuned locally in the final stages.

It also features an Electronic Limited Slip Differential and Electronic Control Suspension with semi-active high-performance dampers unique to the GT.

While we expect the Ioniq 5 N to see plenty of under-the-skin tweaks, it remains to be seen whether Hyundai’s Australian engineers will make any tweaks of their own.

The regular Ioniq 5 didn’t get any local handling and handling tuning.

The electric crossover recently received an update for 2023, re-tuning the ride and handling, with Hyundai citing wheel control, shock absorption and body control as key areas of focus for its engineers.

With the updated Ioniq 5, Hyundai promises a ‘perfect’ mix of driving comfort and exciting dynamics “regardless of the road or surface”.

Hyundai executives have previously said that N vehicles can use any number of powertrains as long as they follow three principles: they must be a “corner crook” and “everyday sports car” and have track capability.

The Ioniq 5 N joins Hyundai’s range of gasoline-powered N cars, which currently includes the i20 N, i30 N, i30 Sedan N and Kona N.

It could be followed by an N version of the recently unveiled Ioniq 6, previewed with the motorsport-inspired RN22e concept.