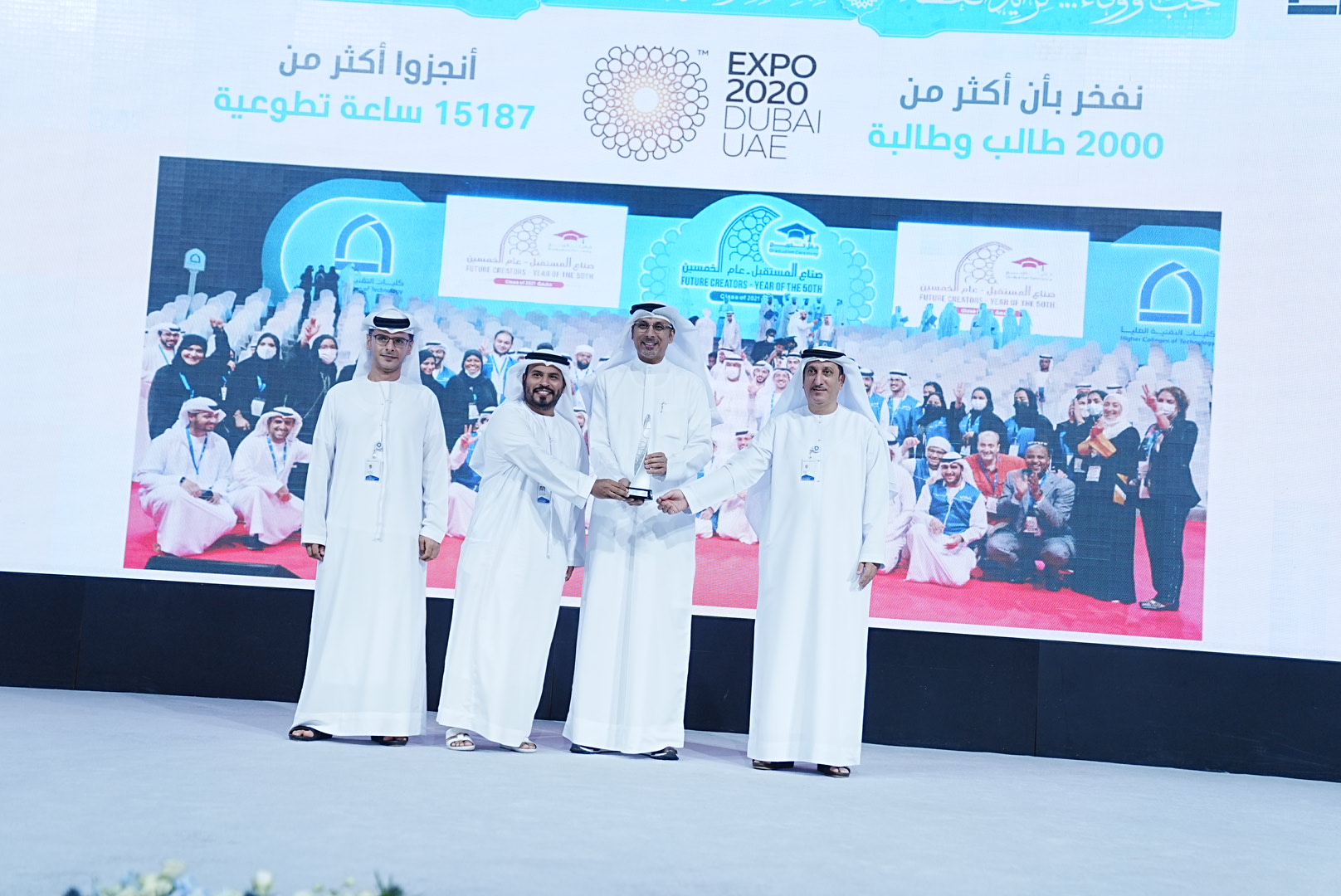 More than 30 male and female students of the Higher Colleges of Technology have completed approximately two million and 200,000 hours of volunteering and community service since the launch of the college volunteering program through the current academic year.
The Higher Colleges of Technology celebrated the achievements of their volunteer program by honoring its students who completed the most volunteer hours in the current year, its strategic partners of the employers, and the volunteer teams who work with the colleges by providing volunteer opportunities to students, in in addition to honoring the colleges most active in volunteering, on the occasion of Zayed Humanitarian Work Day.
The director of the Higher Colleges of Technology, Professor Abdullatif Al Shamsi, said during the celebration at the colleges branch in Dubai on the occasion of “Zayed Humanitarian Work Day”, that “Zayed Humanitarian Work Day” is a day when we celebrate a leader who, with his faith and wisdom, presented actions and achievements that made him an inspiring global model in humanity and giving. It established an ideology that became an approach and made our country today a world leader in humanitarian work.
He added: “Our wise leadership has established this approach in word and deed and affirmed that it is an undivided foundation and a continuous approach. The Ninth Principle of the Fifty Document affirmed that the UAE’s foreign humanitarian aid is an integral part of its path and its moral obligations to the less fortunate peoples, and our external humanitarian aid is not linked to religion, race, color or culture.”
On this day, Al Shamsi annually expressed their enthusiasm to emphasize the human values ​​enjoyed by Zayed’s sons, by announcing and honoring the achievements of the college volunteering program, this program launched in 2017 with the aim of voluntarily make a graduation requirement so that each student commits to volunteer 100 hours within years of his studies and before graduation, but the program exceeded its goals with the students’ enthusiasm and love of volunteering as students now volunteer for thousands of hours of volunteer work, to find that more than 30,000 students have so far managed to complete about two million and 200,000 hours of volunteering and community service, noting that the program’s achievements reached its peak In 2021, he won the Khalifa Educational Award for the field of education and service to the community, praising the efforts of students and strategic partners of the collaborating agencies.
Professor Abdul Latif Al Shamsi, and Director of Student Affairs and Student Life in the colleges, Ahmed Al Mulla, honored the volunteer support groups, the category of strategic partners and their representatives, including 38 bodies at the level of ministries, police agencies, national institutions, volunteer teams, sports clubs and others from different emirates of the country and about 84 of those representatives The authorities for their continuous efforts and cooperation with the faculties.
The ceremony was hosted by the mother, Fatima Ali Ibrahim “Umm Youssef”, the oldest volunteer in the UAE, about 86 years old, and she was honored as an appreciation for her work and volunteerism and as an inspiring model. values.
The award also included the category of the five best-performing students for university-level volunteer hours as a whole: Rashid Al Shamsi, Abu Dhabi branch of colleges, 366 hours, Ahmed Yousef Ahmed, Dubai branch of 359 hours, Hamad Al Balushi, Abu branch Dhabi from 354 hrs, Mohammed Al Naqbi, Abu Dhabi branch from 336 hrs and Hamza Ahmed from Fujairah 336 hrs.
And the category of the top five female students who have completed volunteer hours at college level as a whole are Latifa Rashid, the branch of colleges in Dubai, 917 am, Shamsa Al Raisi from Sharjah, 547 pm, Sarah Al Yamahi from Fujairah, 503 hours, Fatima Al Ansari of Sharjah 481 hours and Kholoud Al Mazmi of Sharjah 476 hours.
And the category of most university departments for students who completed volunteer hours, as Abu Dhabi Men’s College took first place, Dubai Men’s College and Sharjah Men’s College second, and at the level of university departments for women, Sharjah College for Women took the first place, Fujairah for girls in second place, and third place came from Abu Dhabi Women’s College share.
As for the category of people of determination who excelled in providing volunteer hours, Muhammad Al-Amiri, Iman Al-Safdani, Saeed Al-Kathiri, Aisha Al-Shamsi, Al-Anoud Al-Shehhi, Noura Al-Hashimi, Sarah Al- Suwaidi, Fahd Al-Junaibi, Maryam Al-Mismari and Al-Yaziah Al-Shamsi were honored.
And the category of Executive Director of Colleges as a supportive and motivational model for students to volunteer, and it was shared by Dr. Shawqi Kharbash, Director of Colleges of Technology at Al Ain.
Examples of graduates who continued volunteering after graduation and put in thousands of hours were also honored: Fatima Al-Ahmad for completing 6176 hours and Ahmed Abdullah Qassem for completing 4573 hours.